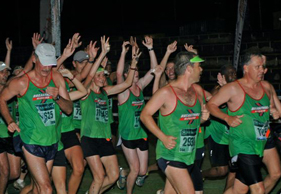 At
the end of 2008, Caroline Wostman set herself this New Year’s Resolution: Run
the Comrades Marathon. “I was always active, but never took it seriously. After
my first child, though, I put on some weight, and after she turned a year old,
I decided to start running. Now I’m addicted!” says the Senior Lecturer in
Auditing at Wits.

After
competing in a few 5km runs, Caroline joined Breakthru Midrand Striders and was
all set for their 21km club run. “They were all so supportive, even though I
was overly optimistic!” Caroline then entered her first official half marathon
event at the Dis-Chem 21, but she missed the start. “I was such a rookie so I
started right at the back with some walkers. I had no idea that you had to be
at the start well before the time. I didn’t consider things like parking!”

Shortly
after her Dis-Chem finish, Caroline tackled the Pick n Pay Marathon and was
taken aback with the demanding distance. “At 35km, I hit the wall. At that
point, I doubted whether I’d ever do Comrades. I was completely exhausted at
42km.” Next up was the Deloitte Marathon, where she had to bail, but she bounced
back with a comfortable finish at the Akasia Marathon, followed by the 50km Om-Die-Dam,
where she could feel that she was ready to take Comrades on.

“At
the club, I’m fortunate enough to get advice from everyone. Comrades experts
were willing to share their knowledge and I knew I’d be okay,” says Caroline.
“Still, my first Comrades I was nervous. The first 30km, I was stressing about
finishing. The next 30km, I enjoyed my run. The last 30km, I was thinking ‘Am I
stupid to have taken this on?’” She finished in a time of 9:17:39, exhausted
and relieved. “I took no gels or energy drinks and I didn’t enjoy it like I
should have,” she says, “but I knew I’d be back! On the highway back home, I
was shattered, but already thinking about next time.”

Having
earned a bronze medal in 2009, Caroline set her sights on a Bill Rowan in her
next run, but then in 2010 she and husband Haiko were planning their second
child, so she had to watch the race on TV. “I was at home watching the runners come
into the finish, wishing I was there. Comrades is such a special event – it unites
a country and everyone has respect for the race.”

And
so she was back for 2011’s Up Run. “I started slow, ran very conservatively. At
Camperdown I saw my husband and kids and they told me about a club mate who
wasn’t too far ahead, so I wanted to catch him.” Caroline caught up with her
club mate and went on to a 8:33:29 finish and a comfortable Bill Rowan – which
got her thinking about her next goal for 2012: A silver medal. “I knew a lot of
guys at the club who had tried to get a silver, but never made it, so I knew I
had to pick up my training to get there.”

To
achieve this, Caroline asked Midrand Striders Club Captain Leon Baker to coach
her. “We did a lot of hill-training and speedwork, and I tested my speed in the
Chamberlains 21km, getting in under 1:30 and finishing fifth. She also got advice
from Coach Norrie Williamson, who came to talk at the club before Comrades, and
with ,
she worked out a race plan of running 6km before walking for a breather, having
tested it at Om-Die-Dam.

Caroline
received a Super-C seeding for Comrades and says she felt pressured by starting
right in the front, but stuck to her plan. “At five minutes a kay, every half
an hour I’d walk, and I met up with at 30km in. We ran together up
until Cowies Hill before I felt good enough to go ahead and run my race.” That
saw her come home 15th in the women’s field in a time of 7:16:48,
taking over two hours off her previous Down Run time, and she was elated to get
her silver.

“It
just all went well on the day. Now I want to keep on going and get another
silver!” says Caroline. No doubt there will be quite a few people watching her
progress keenly, because she seems destined for even greater things. Perhaps a top
10 finish and a gold medal? Watch this space.