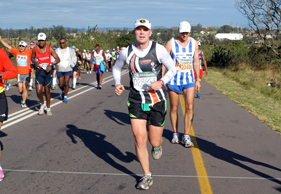 I was at a mate’s braai
when I found a scale in the bathroom, took a deep breath, and stepped on with
eyes closed. I waited a few seconds, then opened one eye to peek at the
numbers: 107kg. I had put on exactly 22kg in the 10 years since leaving school!
So I poured the remainder of my beer down the drain and left, feeling very
sorry for myself (and ashamed). Sunday morning, I was at the shops and standing
in front of the shoes, where I decided not to buy an expensive pair, as I
doubted how long this exercise escapade would last… But nonetheless, I had
taken the first step. So, leaving the shops with a pair of shoes, XL shorts and
an XL vest, I was ready to hit the tar.

Monday, 11 January, the alarm
went off at 5:30am. After snoozing for a while, I remembered those evil numbers
on the scale and pulled my lazy butt out of bed. After 15 minutes of stretching,
I set out on a run. I felt like an abandoned car starting up for the first time
and coughed and spluttered down the road. With palpitations starting, lungs burning,
face all red, I had to stop and lie on the pavement. So I did the walk of shame
back home. All 300m I had managed to run. Total time on the road: Seven
minutes. I was shattered and disheartened. But the next day I tried again, and
the day after that, and the week following, until my buddy Kyle and I went for
a 4km run. He ran most of the way with his hand on my back, pushing me, for 47 minutes.

My first race was the Om
Die Dam 10km and I set myself a target of one hour. I arrived at the line in
basketball shorts and golf shirt, which provided had my mates chuckling the
whole day, but I finished in 58 minutes and got my first medal – what an awesome
feeling! So I decided to really give this running game a go and a group of
mates and I started a small running club in the Greenstone area, meeting up on
Wednesday and Friday mornings for runs. Slowly the mileage built up and I soon
found myself entering 21km races.

I did marathons (PB 3:52) and
ultra-marathons, as well as the Ironman 70.3 in January 2012. Then I set my
sights on Comrades 2012. Standing on the start line, I had a feeling of “I’ve
made it this far, 89km until everything I have worked so hard for pays off.” I
had my family strategically placed on the route and it was amazing to see them,
stop and refuel, then be off again, each time saying, “See you in Durban.” Ten
hours and 42 minutes later, I accomplished my dream, I had run the Comrades
Marathon, the most awesome accomplishment of my life. I felt like a hero!

My whole lifestyle has changed
for the better, and it’s all because of running. I have now lost 27kg, and it
wouldn’t have been possible without my family and friends. Our little
Greenstone Hooligans running club got me up on those cold mornings and the guys
trained with me to get me through it all. You guys are awesome!