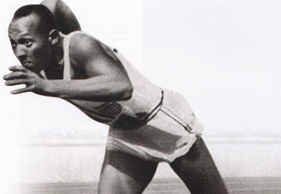 In the
first modern Olympics in 1896, the 40km-long marathon captured the imagination
of the host Greek nation, whose people hoped passionately for a Greek champion.
At about the 34km mark Spyridon Louis, a 24-year-old Greek farmer, caught and
passed race leader Edwin Flack of Australia. When Louis entered the stadium,
Crown Prince Constantine and Prince George of the Greek Royal Family ran
alongside him to the finish line in front of 100 000 cheering spectators.

Finland’s
Paavo Nurmi won the 1500m in an Olympic record 3:53.6, but he had actually been
conserving his energy as much as possible in the race because he was due to run
the 5000m final just two hours later. In the latter race, Nurmi broke away at
the halfway mark and never looked back, clocking another Olympic record 14:31.2
and becoming the first runner to win the 1500m and 5000m in the same Olympics,
a feat matched by Hicham El Guerrouj in 2004.

Nazi
Germany’s claims of Aryan racial superiority were quashed by the performances
of the USA’s African-American sprinter Jesse Owens. First he equalled the
Olympic record by winning the 100m, then he won the long jump gold and set a
new Olympic record. Next he broke the 200m Olympic record twice on his way to
gold, and then was part of the 4x100m team that took gold and set a new world
record of 39.8 seconds.

At 30,
Dutchwoman Fanny Blankers-Koen was considered too old for a sprinter, but she
proved her critics wrong by winning four gold medals in London, beginning with
the 100m. After winning the 80m hurdles in an Olympic record time, she overcame
apparent nerves to win the 200m. She completed her gold medal sweep in the
4x100m relay, bringing her team up from fourth to first in her anchor leg run.

Emil
Zatopek of Czechoslovakia pulled off an unprecedented triple, winning the
5000m, 10,000m and the marathon at the same Games, and all in Olympic record
times. He began by defending his 10,000m title in 29:17.0, then outsprinted the
field in the 5000m to win in 14:06.6. Zatopek had never run a marathon
previously, so he initially matched the pace of pre-race favourite Jim Peters
of Great Britain, but before halfway he surged clear to win in 2:23:03.

When
it comes to track and field, all eyes tend to focus on the sprints, which are
considered the Blue Ribbon events of the sport. Thus it is the country that wins
the 100m and 200m (and the 4x100m relays) that tends to be seen as the
powerhouse nation of the track. Prior to the 2008 Beijing Games, the USA had
dominated this area of the sport, but in Beijing a major shift of power took
place as the small Caribbean island nation of Jamaica took over the Games.

Even
though the Americans won seven gold medals and 23 overall in track and field,
the headlines were dominated by the Jamaicans, notably Usain Bolt, who became
the first athlete since Carl Lewis in 1984 to take gold in the 100m, 200m and
4x100m relay – and all in Olympic records, too. Gold also went to Jamaicans Shelly-Ann Fraser and
Veronica Campbell-Brown in the women’s 100m and 200m respectively

In the end, Jamaica became only the second nation in
Olympic track and field history to win gold in all four individual sprint
events (men’s and women’s 100m and 200m). The US had done it three times before,
in 1964, 1984 and 1988. However, The Americans remain the country to beat in
athletics – they’ve won over 700 Olympic medals through the years, which is
more than the next five nations on the list combined!

From a South African perspective, there will
undoubtedly be much focus on Caster Semenya in the women’s 800m after the
unpleasant wrangle about her sexual status following her sensational win at the
2009 World Champs in Berlin. With all the legal and medical issues now behind
her, she has been able to concentrate on her running again, and SA hopes will
be pinned on her to bring home a gold medal. Another big medal contender is
Sunette Viljoen in the women’s javelin, with her All-Africa record-setting form
going into the Games putting her amongst the favourites for a podium finish.
World Champs silver medallist Khotso Mokoena’s form in the men’s long jump also
seemed to be peaking at just the right time for the Games.

South
Africa has claimed six gold medals (plus 11 silvers and six bronze medals) in
track and field and road running since the country’s first appearance at the Games
in 1908. If one of our athletes can win gold in London, he or she will join an
exalted list of Olympic heroes:

?
London, 1908 – Reg Walker, Men’s 100m: The 19-year-old was the sensation of these Games, coming through one of
the 17 heats and then a semi-final, then going on to win the prestigious 100m
final, and South Africa’s first Olympic gold medal.

?
Stockholm,
1912 – Kennedy McArthur, Men’s Marathon: This race was probably the most
sensational highlight in the history of South Africa’s participation at the
Olympics, with McArthur winning the race and Chris Gitsham taking silver after
the two had a titanic struggle for virtually the whole race.

?
Antwerp,
1920 – Bevil Rudd, Men’s 400m: The war hero first won
the 400m, then went on to win a bronze medal in the 800m and a silver medal in
the 4x400m relay. Thus he became the first and only South African athlete to
win a full set of medals at a single Olympic Games.

?
Amsterdam,
1928 – Sid Atkinson, Men’s 110m Hurdles: The best performance by a South
African at the Games was the gold won by Atkinson in the high hurdles.

?
Helsinki,
1952 – Esther Brand, Women’s High Jump: Not only did Brand win
gold three months after her 30th birthday, but it was the first gold
ever won by a South African woman at an Olympic Games.

Winning
gold in London will also bring our athletes a huge financial windfall, with
SASCOC and the SA Government putting up R400 000 in prize money for an athlete
that wins a gold medal, and that would just be the start of things, with
sponsorships, endorsements, public appearances, book deals and the like to
follow. So now it is up to our athletes to go claim their moment of fame.