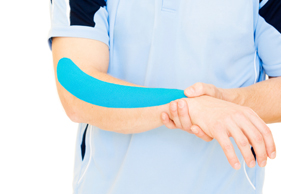 Seven-time
Tour de France champion Lance Armstrong was one of the first athletes to use
the tape, and he praises the “special hot-pink athletic tape that came from Japan
and seems to have special powers” in his book Every Second Counts. In the recent Euro 2012 soccer champs, Italian
striker Mario Balotelli ripped his shirt off after scoring, showing the world three
lines of blue tape on his back. And it’s sure to feature prominently at this
year’s Olympics. In just a short period of time, Kinesiology tape has become a
global sporting phenomenon!

It is a thin
stretchy healing tape that can relieve pain, reduce swelling and provide
structural support to joints and muscles, helping athletes perform at their
peak. While it may seem like a new idea, it was actually developed in the
1970’s by Dr Kenzo Case, says Tony Paladin, Chairman of Gauteng Biokinetics,
Medical Centre owner and elite athlete. “Dr Kenzo wanted to create something
with a similar texture to the human skin, so as to facilitate movement, because
most sports tapes were quite rigid, limiting joint mobility. The thinking
around this was to develop a taping technique that supported and assisted the
muscles and tendon, and not necessarily the joints and ligaments.”

“The
kinesiotape method involves applying the tape around and over the muscles in
order to prevent ‘over-contraction,’ which causes muscular cramping and
tearing,” explains Tony. “This offers support to the muscle, but still allows
full range of motion and hence movement function.” Thus the tape can be used to
treat joint pain or arthritis, reduce inflammation, prevent overstretching,
decrease muscular fatigue and provide relief from cramping.

According to Brett
Goldberg at Spidertech, a South African company that specialises in pre-cut
‘spiders’ of kinesiotape for specific muscles, tendons and joints, the tape
works on three levels:

?
Structural effects are achieved when potentially harmful ranges of motion need to be
restrained, or better postural positions need to be supported dynamically.

?
Microcirculatory effects are attained using the lymphatic range of products, for
treatment of swelling bruising and oedema. This is done by improving
superficial fluid dynamics and lymphatic drainage.

?
The Neurosensory effect provides an
enhanced sensory stimulation, which leads to a decrease in the neural
perception of pain. Thus wearing the tape continuously for a number of days
helps normalise the neural drive to muscles that are involved in painful
conditions, or after injury.

On the up
side, Brett adds that there are other benefits to using this inexpensive tape.
“It is water-resistant and breathable, comfortable and easy to wear.
Applications can be worn for five days, even through showering, swimming and
intense exercise.”

NOT QUITE DIY BIOKINETICS

Thanks
to the growing popularity of kinesiotaping, health and fitness education
institutions like HFPA now present courses in taping, and more people are
learning to strap themselves, but you must be careful not to end up with a
“fashion accessory,” says Tony. “Merely slapping on some funky-coloured tape
makes the muscles look pretty cool, but without understanding why the tape has
been applied, the athlete will generally continue to move ‘around’ their source
of dysfunction and not ‘through’ it by moving into the area of weakness.” He also warns that
kinesiotape cannot always replace rigid taping: “Sometimes joints need
to be stabilised in order to prevent further damage to them whilst the muscles
are rehabilitated.”