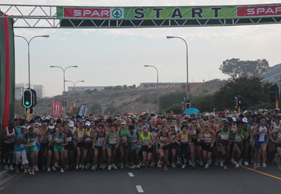 Picture
this: A South African race has grown so popular that the organisers announce a
25 000 cap on entries in order for the venue and route to handle so many
athletes. Chances are you’d probably assume we are talking about the Comrades
or Two Oceans, but we’re actually talking about a Spar Ladies 10/5km event! And
that is because the various women’s races on our calendar, notably the Spar
Series races that have been going for around 20 years and the slightly younger
Totalsports Ladies’ races, are attracting an ever-growing number of women (and
quite a few cross-dressing men) to the roads.

It
all started in 1991 when the first Spar race was held in Durban, as Spar looked
for a way to give back to its customers, says original race co-ordinator Ian
Laxton: “Ladies only, no time pressure, fun, entertaining, and all lady athletes
get their value for money with a big goody bag! This formula has kept the
series going successfully and made the numbers grow dramatically.” That first
race had less than 500 participants, but by 2000 it had grown to 25 000! And
seeing how much fun was being had at the coast, Johannesburg got in on the act
in 1992, followed shortly by Cape Town, Port Elizabeth, Pretoria and
Pietermaritzburg. Today the series boasts a collective 85 000 entries per
year, and also features the Spar Grand Prix, where top runners across all age
categories can earn points towards cash incentive prizes and a new Nissan Micra
for the overall winner this year.

Understandably,
the folks at Spar are proud of what they have achieved. “The Races are growing
each year, which is testimony that we are doing something good,” says Spar
Sponsorships Manager Belinda Nel. Echoing these words is Rob Philipson, Managing Director
of SPAR: “We are very proud of the enormous impact the series has on thousands
of women across the country, and are pleased to see that they are in turn
supported by a host of family and friends, in the build-up to the race and on
the route.”

The
TotalSports Ladies’ Series was launched in 2001 in Cape Town, but it was
originally called the Avon Ladies Race, with TotalSports as the presenting
sponsor. That first race brought 400 women to the roads of Bellville, and by
the next year the field had grown to over 4000! Then in 2003, with TotalSports
now the title sponsor, the race moved to picturesque Stellenbosch, and it’s
still growing in size today.

“Johannesburg
also needed a taste of TotalSports energy and therefore our second race was
launched in 2007, and in 2011 we added a third race in Durban,” says Jacky
McClean, head of PR and Communications at Stillwater Sport & Entertainment,
which co-organises the series in conjunction with another pre-eminent SA race
management company, Top Events. “Now the series boasts a combined turn-out of
15 000 lovely ladies each year, with the Stellenbosch and Johannesburg races
both on National Women’s Day. We always had it in mind to celebrate this day
with our races, and to focus on ensuring a super experience for runners, walkers,
sponsors and spectators.”

So this August, celebrate
Women’s Day (and month) with your feet by being part of one of the many
wonderful women’s races on the calendar:

(Turn
to our Race Calendar on page 36 for more details.)