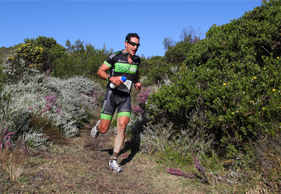 Stuart Marais took line honours in the individual men’s category
of the XTERRA Full (3km trail run, 22km mountain bike and 7km trail run), but
the win did not come easy as he went up against multiple SA mountain biking
champion and 2010 XTERRA Knysna winner Kevin Evans. “The race was really hard,”
said Stuart. “I had to build a lead on Kevin and Nico Pfitzenmaier, which meant
that I had to go out really hard on the first run. Kevin caught me quickly on
the bike leg, and it felt like I was standing still. At transition I heard he
had a two-minute lead on me, so I put my head down and just tried to find my
rhythm.” Stuart caught Kevin again and opened up his own two-minute lead to win
in an impressive 1:39:32, as Kevin took second in 1:41:44, with Nico third in
1:42:07.

Women’s winner Susan Sloan also said she had to work for her
win, which she took in 2:01:58: “I had some technical trouble with my mountain
bike today, forcing me to work even harder, but the runs were good. I had to
push hard throughout, as I knew that Alae Brand and Fienie Barnard were right
behind be, and both of them are really strong runners.” Alae finished second in
2:03:31, followed by Fienie in 2:05:15. Team Perde was the first men’s team
home in 1:58:24, while Team Giant Mavic was the first women’s team in 2:15:30. Team
Fun Freaks was first mixed team in 2:18:28.

Dan Howitz
took honours in the individual men’s category of the XTERRA Lite (3km/12.5km/3km)
with a winning time of 1:02:43. Matthew Lombardi came in second, while Philip
Van Niekerk finished third. Heleen Rossouw took the women’s category, winning
in 1:18:40, with Marguerite Van Niekerk second and Jade Hooke third. Team Pa en
Seun was the first men’s team home with a time of 1:06:39, while Team Lombardi
Salomon took the women’s team competition in 1:17:47 and Team Cyclerun was the
first mixed team in 1:07:42.

Sidebar, with MY EXPERIENCE
icon

(Header) Fun in the Mud

(Intro) It didn’t take long for this leg of the Totalsports XTERRA series to
become one of my favourite events of the Knysna Oyster Festival. – BY KEVIN EVANS

I was
back for my third year, and the event definitely keeps me motivated to cross-train
and keep up the running… but to give you an idea of my priorities, in three
years I’m on my sixth mountain bike, but still the same pair of running shoes! The
first 3km trail run is always intense, and I could not believe the speed at
which pre-race favourite Stuart Marais took off. I could only run as fast as my
legs would take me, and had to settle for around 10th position,
about two minutes down heading into the first transition.

Once
onto my bike, with mudguard firmly in place, I could use all my experience of
racing in muddy conditions to gain as much time as possible. Although my bike
form is not where it usually is for this time of year, I started to catch guys
quickly, and after about 12km I passed Stuart. I had a small mental battle with
myself to slow down, as I knew he would out-run me on the final run, but
decided to push on and get as much of a head-start as possible.

I
always enjoy coming into the second transition after making up so much time, as
commentator Paul Valstar really gets the support behind you. I shoed up as
quickly and set off for the 7km trail run, with a slender two-minute lead over
Stuart and Nico Pfitzenmeier. I knew Stuart would catch me, but I wanted to try
stay ahead of Nico. The second trail is pretty hard by my standards, so the
legs were starting to tire and my back was beginning to fatigue, but with the
finish line just ahead, I pushed on and maintained a gap over Nico to take
second place again. As always, I thoroughly enjoyed the event, and at least
Stuart said I made him work for it!

(Intro) With two races distances through a gorgeously scenic
nature reserve on offer and three different time slots in the day to run them,
the Featherbed Trail Run really gave runners a great day out in Knysna.

Elite multisport athlete Stuart Marais won the fourth annual Salomon
Featherbed Trail Run at the Pick n Pay Knysna Oyster Festival. Competing in
this event for the first time, he posted an impressive time of 55:50 on the
15km Coelacanth Route in the early morning running of the race. Afterwards, he
described the run as a “proper hard route, but definitely one for the bucket
list!”

Starting with a ferry trip across the Knysna estuary, the route takes
runners through the well-known Featherbed Nature Reserve and Brenton on Lake,
then back to town via the railway bridge over the lagoon. Knysna local
Melikhaya Msizi, who competed in the afternoon, also made it in under the hour-mark,
coming in second with a time of 59:36. Third place went to Nicholas Rupanga,
who finished exactly on the hour, second in the morning slot, and then won evening
run of the 11km Seahorse Route and took second overall in the shorter race.

“The Featherbed Trail Run has grown from one to three race slots since
its inception in 2008. The event’s two routes offer a unique opportunity to run
across the western Head of Knysna and is the best combination of challenge and
spectacular scenery,” said race director Mark Collins of Knysna-based event organising
company Magnetic South. “This is also the first year ever that the race was not
contested in pouring rain, and it proved to be even better when conditions are
good!”