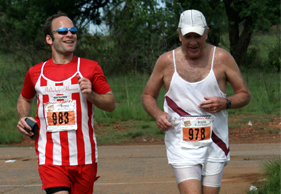 Throughout my 18 years of running, I
have loved it when the race photographers captured me in full flight or
crossing the finish line, and I tend to buy all my race pictures, even the
not-so-good ones where my shorts are pulled all skew, because I want to keep
those race memories alive. However, I have noticed that I am often grimacing or
looking half-dead, or worse, smiling like a lunatic who just escaped from the
asylum and found a road race to escape into. And some of the poses I have pulled
over the years defy explanation!

Looking through my many race pics, I
can see a few standard poses:

?
The Winner: For
some reason, in my early races I felt compelled to raise both arms in the air when
I saw a camera, which made me look like I was winning the race. The fact that I
was actually 975th out of 1427 runners made no difference! There is
even one race pic where I am in the finishing straight, with no other runner in
sight, so it looks like I’m about to break the tape. Totally ridiculous!

?
The One
Finger Saluter: You raise one hand nonchalantly, extend the
forefinger while balling the rest of your fingers loosely, and point in the general
direction of the camera. I really have no idea why I do this all the time…

?
The Talker: I enjoy a
good chat during a run, and sometimes I’m so busy chatting to the runner next
to me that I don’t see the cameras. Cue a wonderful side profile of my face…
and with my receding hairline, side profile shots are not so flattering!

Of course, there are other poses
that I also try to avoid at all costs:

?
The Thumber: You see the
camera and immediately give a thumbs up sign, usually accompanied by the
cheesiest grin you’ve ever seen. And if the race is really going well, you give
two thumbs up!

?
The Flexor: These runners flex their
muscles at the camera – usually the biceps, because it’s blinking hard to actually
flex your leg muscles while running.

?
The Waver: All this achieves is put a
blurry object vaguely resembling a hand in front of your race number, meaning
that the race pic company can’t identify you to send you your pic. Or worse, you
ruin the pic of the runner next to you – and Murphy’s Law says it will be the
one time that runner actually managed to strike a good pose, but now your hand
is covering half his face!

?
The Reluctant Winner: Camaraderie sometimes makes us want to hold on to each other, especially
as we cross the finish line, so we hold hands and raise our arms. This pose
works well if all runners participate fully, but invariably it is one runner raising
another’s hand, and the pained expression on the latter runner’s face just
says, “I’m tired and I can barely lift my arms anymore… so give my arm back,
you madman!”

?
The Flasher: On cold days we wear jackets
or shells over our race vests, which means our race numbers are covered. Then
suddenly we see a camera and the first thing we do is lift our outer top to
show our race number, and just like that, we’re caught flashing. It never looks
good.

My standard pose these days is The
Ignorer, a valiant effort to avoid all the above-mentioned poses. The logic
is that if you pretend to ignore the camera and concentrate on running while
looking determinedly straight ahead, the camera will hopefully, for once,
capture you looking like the elite runner you wish you were. Problem is,
invariably the pic gets taken just as you gasp for breath, so your faces is
contorted, your eyes are slightly glazed and you look like you are just about
to collapse. At least, that’s what I look like…

But the ultimate pose for runners to
avoid is The Walker: For some
reason, runners have this morbid fear of being caught ‘on film’ walking. We
have no qualms about taking a walk break during a race, but just let somebody
point a camera at us and we heave ourselves back into running motion, even if it
makes us look like a walrus trying to drag itself up a steep beach! Just as
long as nobody sees evidence of us walking!

Dedicated to all those hard-working
race photographers, who patiently put up with us weird and wonderful runners.