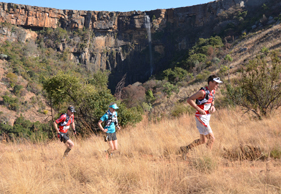 Whether you take part in the 36.5km Challenge or the 15km Rough It, this
is a race that will test the physical and mental skills of even the most
hardened trail runner – which is why some of South Africa’s leading trail runners,
including Landie Visser, Jock Green, Mazu Ndandani, Graeme McCallum, Christiaan
Greyling and Dom Wills, lined up in July to be challenged by the Bankspruit Gorge,
Hells Kloof and Skurwerberg.

In the men’s 36.5km, Christiaan
Greyling powered through for the win with a quad-breaking 4:53, while Landie Visser was crowned the ‘Trail
Klipspringer’ after covering 36.5km of sandstone and forest twisters in 5:08. Num-Num staff member Sijila Msitini is
one to watch. In his very first race ever, he came third, thanks in part to
trail shoes bought with contributions from other runners on top of a massive
discount from Sportsmans Warehouse. Afterwards he said he loved the shoes, but
reckoned he would have done better if he ran in his overalls and not trail
running pants!

Graeme McCallum took a
wrong turn and did the Bermanzi Loop twice, which is only the toughest part of
the trail. Think rock climbing for 1.5km and 2km downhill on loose stone…and
then doing it again! 40km in 5:31 guaranteed him a good night’s sleep. Still
further back, the last runners made it in just after dark in 11 hours.

The 15km runners took on some of the
technically trickiest parts of the Num-Num Trail, limbering over old boulder
falls, in and out of forested areas, through sandstone rock formations, and the
route was a bit tougher than last year. Jonathan
Beattie took first place in 2:52, but Roelof Nel (2:53) and Deborah
Leat (2:55) were hot on his heels. Unfortunately, Riaan van der Vyver
took an emergency exit and had to be DNFed, but he set a blistering speed. The
last runners did the 15km in over five hours.

Francis Darvall, co-owner of The
Num-Num Trail, said “We were blown
away by the runners on the Challenge. This sport requires individual to reach into
the depths of their endurance, and yet everyone still acts with impeccable
integrity and team spirit. We are determined to grow this event and make it
even more efficient, challenging and enjoyable for trail snakes and
klipspringers.”

To
get onto the VIP list and stand a chance of securing an entry for the 2013
Num-Num, e-mail: info@thenum-numtrail.co.za.

“Congratulations on an awesome race. A real trail race – and you can quote me! This is the way
it should be, thank you very much. I had a wonderful time out there!” – Bani Erasmu