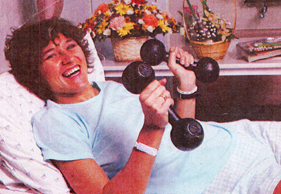 Page
through the record books and you’ll see the name Myrtle Bothma proudly sitting
at the top of the all-time list for South African women in the 400m hurdles, with
an SA record of 53.74 seconds that she ran in April 1986. Check the times for
the 400m sprint and you’ll she is still second on the list, with her 50.12 of
1986 only bettered by Heide Seyeling’s 50.05 of 2000. (And she is in the top 10
for the 200m as well). Those times run way back in the 80s for the two
single-lap events were world class, despite being completely
isolated from world athletics, and Myrtle was a permanent fixture in the top
placings of the world rankings for her events. So had she been given the
opportunity to run in the Olympics or World Champs then, who knows what she
could have achieved?

Born in
Queenstown and growing up in and , Myrtle always held a great love for sport.
She would try out and get involved at all the school sport days, playing
netball, hockey, soccer and swimming, but her real passion was athletics – and
she was good! Having always competed in the 100m and 200m sprints, Myrtle moved
up to the 400m and 400m hurdles after tearing her thigh muscle in the shorter sprints,
and in her matric year she was awarded her Junior Springbok colours for
athletics and began running competitively for the Eastern Province. After
school, Myrtle ran for the then Northern
and went on to captain both her province and the Springbok team.

ON THE WORLD STAGE

The release
of Nelson Mandela in 1990 saw sweeping political change in ,
which in turn meant that our athletes could once again begin dreaming about
international competition. Myrtle believed that she could compete with the best
in the world, and in 1992 she grabbed her first chance to do so, taking gold in
the 400m hurdles at the African Championships in . Myrtle’s winning time
was 56.02, and she was one of 14 gold medallists from ,
which dominated the meet with 45 medals in total. Myrtle’s African supremacy
ignited her hopes to compete at the Summer Olympics in later that same year, and she was
duly selected for the team for the country’s first Olympics since 1964.

This was the
moment that the SA athletes had been hoping and waiting for, to represent their
country at the biggest sporting event the world has to offer. Myrtle says she
was beaming with pride at being given the opportunity to go to the Games. “After
years of isolation, I could finally compete. I felt so proud to be South
African at that moment,” she recalls, and she also fondly recounts that she got
to meet Madiba just before those Games began. “He came in and greeted the team
in the town where we were staying. Even though we had no flag or song to
identify with, we felt proud to be there,” she explains, “I recall it as an
amazing day, even though at that time, the athletes didn’t understand how
important Mandela was. Now I do, and I have a signed Olympic programme from the
man himself!”

Myrtle says
she was simply blown away by whole Olympic experience. “The opening ceremony procession
at the Olympics is something you can’t describe to anyone who hasn’t experienced
it. It was just incredible as we stood there with all the top athletes from
other countries, and I got to meet amazing people like tennis legend Steffi
Graf.”

In Myrtle’s
first heat for the 400m hurdles, she posted 55.60 to finish third and qualify
for the semi-final round, where she ran 54.53 for fourth, qualifying for the final.
Unfortunately, she did not finish that last race. “In the final I fell on the seventh
hurdle, breaking my hip in two places, which eventually prompted a full hip
replacement six years ago. But back then I used my fall as motivation, telling
myself that there are no shortcuts to success!” Sally Gunnell from
won the 400m hurdles gold and Myrtle still sees the Brit as her toughest
competitor, given that she was rarely challenged by other South African hurdlers
of the time.

At her peak,
Myrtle trained twice a day, going to the gym in the morning and going to the
track in the afternoon. She also trained on weekends and used December as her
month to train hardest before the track and field season began. Her oldest
child Nellis, from her previous marriage, grew up with his mother’s active
lifestyle, waking up at 5am to train with her and often spending time doing
homework beside the track while she trained. “My oldest also used to fly around
the country with me and he was a big part of my athletic life. My two youngest
children are also active, but they now see me more as a coach, not an athlete.”

Today
Myrtle is an athletics and hockey teacher at Ho?skool Oosmoot in , and says she loves
giving back to the young athletes. “I’m crazy about what I do and love being
involved in high school athletics! I’m here today because athletics has been
part of my life and will always be.” She considers her days as an athlete as
her greatest, and says she misses the camaraderie of fellow athletes at
international and national events. “We were really one big family, and the
coaches, athletes and officials were all friends. So your winter training programme
was more like a big family get-together every season. I miss that. Luckily, there
are many former athletes involved in coaching these days, so we still see each
other occasionally at schools events, and that is nice!”

But most of
all, Myrtle’s fondest memories of her athletic career are flying to and to represent her country,
and of wearing the green and gold colours. Today she says her focus is on giving
promising athletes the simple advice that got her through her training and
racing, and made her one of the best in the world: “All you have to do is
believe in God and in yourself.”