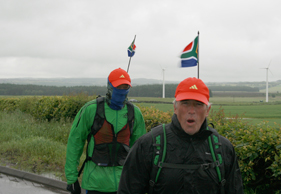 Pinning
David Grier down for an interview is a challenging business when he literally
flies into the country for one day, having just run 1350km the length of the
UK, before flying back to run the length of Ireland, another 552km – and then
he is likely going to go back up north to run Hadrian’s Wall, a further 120km…
But he’s happy to chat on the phone about his latest fundraising run to raise
funds for Operation Smile while waiting in the airport lounge for his flight
back to London.

David
was one half of the SA duo that ran the length of the Great Wall of China in
2006, along with Braam Malherbe. Then they ran the SA Coastline Challenge, from
the Namibia/SA border to the SA/Mozambique border. David then went solo,
paddling from SA to Madagascar and running the length of the island (south to
north), an epic trek that saw him come close to dying several times. Next up he
ran the length of the Indian sub-continent (north to south) in 2011. “Out of
all my journeys, India was the hardest. It was a mental battle every single day
to carry on, because India is so chaotic. I had people around me 24/7 and never
got any peace. The noise, pollution, traffic, and constant harassment by police
and officials were terrible, but the incredible people pulled me through.”

With
his Indian run still fresh in the memory, this runner extraordinaire came up
with another idea to raise funds on the run: “I phoned up the London 2012
Olympic Committee and told them I wanted to do a fundraising run across the UK,
given that the Games were about to start, and they said they were fine with
that, as long as I didn’t end up in any of the stadia. So I asked Andrew Stuart,
part of my support crew in India who ran quite a bit of that run with me, to
run the UK Challenge with me, with Darren
Swartz as support.”

This
saw the two runners start at John O’Groats, the northern tip of Scotland, and
run to Land’s End at the southern tip of England. “We started on the 20th
of June, it took us 25 days to finish, and it rained on 24 of those days!” says
David. “They put us on the A roads, because we were not allowed to run on any
of the M road highways, but the A roads have virtually no verge, just a white
line and then about 100mm of tar. So we had trucks and cars flying down the
road at us and and due to the weather, we would get obliterated by the spray of
water from one vehicle, then the next driver couldn’t see us and would have to
swerve at the last second. We were diving into the hedges all the time! And the
few times we accidentally ended up on an M Road, the police were usually there
within minutes!”

It
was also an eventful run for David thanks to his Achilles. “Our aim was to cover
50km a day and we had a tight deadline to meet because my flight back to SA was
already booked for the 15th of July. This was the first time I ran against
the clock, and that made it very hard. The first day we did 38km, then 48 on
day two and from then on we were hitting 50 comfortably, but 300km in, I pulled
my Achilles and thought I had ruptured it. I’ve had injury problems in all my
runs – every morning you wake up and think, how far can I go today? Then you
take it one day at a time, concentrate on the injury and just try to keep
going.”

“So
I took anti-inflammatories and the next day we had to walk 55km – it took us 14
hours! We did that for a week and that solved the problem, but now we were behind
schedule, so we had to pick up our daily distance in order to make the deadline.
We were averaging 5 to 5.5 minutes per kay, and would start each day with 15km
of walk five minutes, run 10 minutes hard, then go up to 5/20 sets for 40km,
and end off with another 5/10 set for the last 15km. That allowed us to push
70km a day, and we were flying!”

The
reason David headed straight back to run Ireland is because of an online
competition run in conjunction with the UK Challenge. He asked supporters to
like his Facebook page and if the ‘like counter’ finished higher than his
mileage at the end of the run, he said he would run Ireland as well. With the
tremendous support David enjoys for his runs, the flights were soon being
booked… and he may have another run coming up straight after Ireland.

“The
guys at Aegis Media in SA challenged me to a virtual race. When I am two days
from finished in ,
they will start a 120km treadmill relay at their offices, and if they beat Andy
and I to the finish line, I must go run .
But we’re flying along at 70km a day at the moment, so I don’t think they will
do 120km faster than us.” After a short pause, David then adds, “But I reckon I
will go run Hadrian’s Wall anyway.”

Unsurprisingly,
David already has plans in place for his next run, but he says he is
approaching things differently now. “I can’t do this forever – and I don’t want
to be this old piece of biltong still crunching the road in 20 years’ time – so
I’m challenging others to step up now and make a difference. We’ve already got
other athletes doing long runs or paddles, even an artist doing 30 paintings in
30 days, all to raise funds for Operation Smile. Then in two year’s time, I
want to take a group on my next journey, all fathers and working men like me,
and we’re looking to run and paddle Cuba.”

David
recently launched a new healthy cooldrink for kids with Liquifruit, called I-can.
“It’s a blend of red grape and pomegranate, and the name is short for ‘I can
achieve anything.’ For every can sold, R1 goes to the Miles for Smiles
Foundation.” Through initiatives like this and his incredible running feats,
David hopes to continue raising funds for the kids who need operations. “We’ve
raised over R5 million and funded over 1200 operations already, but it is
getting more and more difficult to raise funds due to the economic climate, and
people are suffering from ‘donor fatigue.’ So I don’t have a specific target in
terms of how much I want to raise. It takes just R5500 to completely change the
life of one of these kids, so I just want to make as much of a difference as I
can.”

To
support David and his fellow fundraisers, go to www.milesforsmiles.co.za.