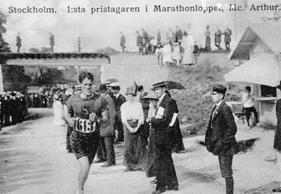 I was most
honoured to be asked to go to Dervock in July and talk about one of the town’s
own sons, and one of SA’s greatest sportsmen. Kennedy Kane McArthur was a
remarkable man who had many hardships to overcome in his adopted country and
worked hard, both in his profession as policeman and in his sport, but it was a
life of adventure that took him from the green Irish countryside to the dry,
harsh environment of the Transvaal Highveld in SA. However, McArthur never for
a moment forgot that he was an Irishman and he never let other people forget it
either. It is said that he “talked incessantly about Ireland and about the blue
hills and green glens of his native Antrim”, and according to five-time
Comrades Marathon winner, Arthur Newton, McArthur “had just two subjects of
conversation: Ireland and athletics. He would talk about either for hours and
hours, and for as long as there was anyone around to listen.”

Yet he proudly
wore the green and gold SA colours in Stockholm, with the Springbok on his
chest, and after his victory said: “I went out to win or die and it was worth
two-and-a-half years working and waiting for. I am prouder to have won for
South Africa than for myself.” McArthur never lost a marathon and occupies a
unique place among the heroes of South Africa’s sporting history. He was the
first to win a distance event for SA at the Olympic Games and was one of the
country’s most accomplished runners during the first two decades of the 20th
Century.

Big Ken, as
he was called in Dervock, worked as a postman and could often be seen running
through the streets delivering the mail. In 1901 he emigrated to ,
towards the end of the Anglo-Boer War (1899-1902), as a volunteer member of the
Baden-Powell South African Constabulary. He was appointed as a third-class
trooper and was later promoted to constable in 1905, then transferred to the Transvaal
Police in 1908 and was stationed in the Potchefstroom district. He seldom did
his patrol work on horseback and mostly walked, even though he had a huge area
to cover. After the First World War, McArthur joined the Transvaal Town Police
and in 1931 retired from the South African Mounted Police with the rank of
sergeant. After that he worked for Crown Mines as head of the mine police.

He met his
future wife, Johanna Jacoba Christina Louw, at a party held at her parents’
Potchefstroom home. Nicknamed Joey, her first impression of the tall,
well-built Irishman was not favourable – her first thought was, “What a horse’s
face!” – but they saw each other often after that. He was already running then and
she often accompanied him on her bicycle during training sessions. McArthur was
big for a marathon runner – he was 1.88 m tall, weighed about 77kg and loved
food – but when he started his running career around 1903, he achieved
immediate success, as the many trophies in the Potchefstroom Museum attest. McArthur
scored victories in shorter track races and also in cross-country, but on a
national level he was outshone early on by Charles Hefferon, winner of the
silver medal in the 1908 Olympic marathon, and Chris Gitsham, who won silver
behind McArthur in 1912.

UP TO THE MARATHON

The SA
Amateur Athletic Association had been formed in 1894, and enthusiasm for
cross-country running and walking in the first few years of the century led to
interest in the marathon, with the first ever marathon in SA being run in
August 1907 in Cape Town. McArthur tried his first marathon – actually it was
only 20 miles – in April 1908 and just 18 days later won the first SA Marathon
Championship in Cape Town. Despite this easy victory, he was not selected for
the 1908 Olympics, causing huge controversy because Hefferon, who had dropped
out of the race, was included in the team. Even in those days politics played
its ugly role in sport and one newspaper called the selection decision “gross
favouritism.” But even though he was denied a chance for Olympic glory this
time around, the victory launched a tremendous marathon career

In Durban in
October 1909, he won The Latest Marathon and set an SA record of 2:44:36 – at
the time, the world record was 2:42:31. This performance is even more
significant if one takes into account that the race had started at 2 o’clock in
the afternoon, which in the usually humid subtropical conditions of Durban,
could not have made it easy for the competitors. Just more than a year later,
McArthur ran even faster when he won the Argus Marathon in Cape Town in
2:42:58, then the fastest time ever recorded anywhere in the world on an
out-and-back course. He also won his first SA track title, over 10 miles, just
a week before the Olympic team’s departure for Europe.

Athletes did
not have it easy in those days, not even at the Olympic Games. Whereas today
millions are spent on sport, equipment and nutrition for elite sportsmen, the
South Africans in Stockholm had to make do with less than ideal circumstances.
According to coach H.B. Keartland, the team was always short of money. Also, running
a marathon back then was no jog in the park, with dusty, uneven roads, and
cyclists and motorists racing along in front or reversing back to report
progress or support the back-runners. Even the conditions in Stockholm were
extremely arduous, with the temperature reported as being 32 degrees in the
shade. Luckily the dirt roads were hard-packed and both swept and lightly
watered before the race, and all wheeled traffic was forbidden. Still, it is
alleged that McArthur lost almost 6kg during the race. Joey said teetotaller
Ken was given champagne after the race and drank seven glasses before he
realised what it was!

Ken’s winning
time in Stockholm was 2:36:54, more than six minutes faster than in Cape Town
two years earlier, but the distance was only 40.2km. (The now standard distance
of 42.195km (26 miles 385 yards) was only used at the Olympic Games from 1924
onwards.) One rather florid newspaper description of the race read “…and in
comes the conqueror, a flushed and dusty vision in green and gold … The throng
jumps to its myriad feet with a roar. What feet could rest inactive at such a
sight? … he had defied the augury of Phoebus himself, and a burning sun, poured
rentlessly [sic] down upon him.”

Back in
Dervock, he was given a welcome of fireworks and banners, and a plaque
commemorating his victory was unveiled in the Town Hall. Upon his return to Potchefstroom,
he was accorded a mayoral procession and honour guard, and the Potchefstroom
municipality presented him with a plot of land on which he built a house and
lived until the end of his life on 13 June 1960. He is buried in the
Potchefstroom cemetery.

There are
two sad things about McArthur’s running career. The first one is the
unfortunate injury he suffered about a year after the Olympic Games, which
ended his career at only 32 years of age. The other is the disappearance of the
gold medal given to him by King Gustaf V in Stockholm. It once was part of the
McArthur collection in the Potchefstroom Museum, donated by his widow in 1961,
but went missing in the early 1970s. It is indeed a tragedy that this prize, and
one of only six won by SA in a hundred years, is no longer available to be
admired.

Ri?l Hauman wrote an extensive article on the life of
Kennedy McArthur for the 2012 edition of the SA Athletics Annual, of
which he is the Editor. He has written two books on athletics and is planning a
biography of McArthur. He also publishes Distance Running Results, a
weekly e-mail newsletter with South African and world results (distancerr@mweb.co.za).