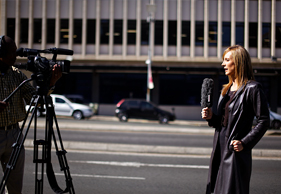 There’s an
aura surrounding Debora Patta: Hard-hitting, to the point, perhaps even a
little intimidating. And it’s that style of journalism that has taken her all
over the world to meet important figures and cover the news and issues. For the
past two decades, she has fearlessly reported on world events, from the 9/11
attacks in New York to US President Barack Obama’s election campaign. On local
shores, she delivers commentary on political events, shedding light on corrupt
officials and putting those in power on the spot with her probing questions in 3rd Degree – and her frank
approach had former ANC Youth League president Julius Malema, former Metro
Police Commissioner Robert McBride and former National Police Commissioner
Bheki Cele, amongst others, sweating in the hot seat!

Starting
her career at Radio 702, Debora followed Madiba’s release, reported on Princess
Diana’s funeral and the terrifying Gulf War in Baghdad. In 1998, she moved to
E.tv to become their senior correspondent, then moved up to Chief Anchor for
eNews Live from March 2000 to 2005. In 2000, Debora also premiered 3rd Degree, a current affairs
show that tackles hot, controversial topics, and she is still host and
executive producer today. “It’s been a fantastic brand with millions of viewers
and has grown a great deal! I am a product of my team. There are some spunky,
talented journalists who I look forward to mentoring in the future!”

Debora says
her job has given her opportunities to travel around the world and meet amazing
people, and she remains happy about the path she’s carved for herself. “I love
that no work day is the same, and that I get paid to be curious and brave. The
thing about journalists is that we run into places most people are running out
of!”

But there’s
more to Debora than what we see on TV. In person, she is open, candid and welcoming,
and proud of what she’s accomplished in her career. She loves to read, watch
movies and hang out with friends. She’s a wife and mother to daughters Chiara
(12) and Isabella (6), and a complete fitness nut as well. While juggling late
hours in researching and producing stories with her team at 3rd Degree, and playing mom, Debora also fits in exercise six days a
week, running on three days and mixing in cardio at the gym and cycling. On the
weekends, she’ll run between 10km and 21km, usually at a steady six minutes a
kay.

“People who
say there is no time to work out are full of excuses. I have two kids and only
get home after 7pm and I make the time to exercise for an hour a day,” she says,
and in all the global events Debora has been witness to, she’s used running to
explore the different cultures and cities she has had the chance to be in. “I’m
pretty rigid about exercise and what you put in your body. I’ve run everywhere.
From to
and .
I ran past Kensington Palace when Princess Di died and saw all the flowers
people left. I’ve also run in India and Hong Kong.”

For her,
it’s a unique way to see a city when she is working, “When you run, you
discover more about a place. Running in Baghdad, you experience the people
being so nice and there’s a great vibe, but I had to cover up as much as I
could when I went for a run.” Debora also put on her running shoes in New York
after the 9/11 attacks on the World Trade Centre. “It was like running in a
city of ghosts,” she explains. “There were pictures of missing loved ones
posted everywhere and you just knew they could be dead. There was something in
the air – a muck – but I got to see what it was like.”

Debora also
uses running to get away from the stress and deadlines. “I never think about
work when I run, my mind sort of goes blank, but every now and again I get
these flashes of inspiration. Generally it is a total switch-off time, just my
feet pounding, great music and hopefully a really good runner’s high!”

BRING ON THE SWEAT!

Apart from
waking up every morning at 5am for a run, Debora also does boxing, spinning and
cardio work at gym to keep fit. In 2010, she also trained for her climb up
Kilimanjaro by running up the Westcliff steps in Johannesburg. “Kili was an
amazing challenge for me and I trained for six months. You need to be fit
because the last stretch up is an 18-hour day where you’re climbing for 12
hours and then coming down for another six.”

Debora is
also looking to run on the Great Wall of China next year and is working hard
for other challenges. While she maintains she runs for herself and for
relaxation, she embraced competition in 2010, running the New York Marathon in
4:22:09 in support of the JAG Foundation, a charity focused on mentoring and
coaching organised physical activity programmes, targeting alcohol and drugs
head-on by showing the kids of poorer communities that they can leave a happy
healthy life. “I loved New York. It was a very easy, flat race, very cold but
very cool. As you run through each neighbourhood, people would come out to
cheer you on and if you put your name on your bib, they would call it out. It’s
the nicest race I have ever run!”

Debora
makes sure to eat healthily because she explains that her body “is not a
Ferrari anymore!” Exercise and nutrition remain top priorities for her and she
is a strong advocate of Tim Noakes’ no carbs theory. “Me having Italian blood,
I actually don’t eat a lot of carbs like pasta and pizza. I eat a lot of fruit
and protein. I’m also a great cook and whatever I make for myself, my girls
have. I’m not lucky at all when it comes to my weight, so I work really hard!”

Love her or
hate her for her forthright, hardcore approach, Debora has remained at the peak
of the country’s media world for 20 years and that is a testament to her strong
desire to report accurately and truthfully. “If I had to advise my younger self
starting out, I would say be brave and take risks. Also, now that I’m older, I
don’t care about the criticism I’m given. I don’t let anything get to me now.
You can’t just crumble over criticism.”

She also
remains hopeful for her future and the future of the media world in South
Africa. “Nothing should stop journalists now. We need to push it! I push for
the difficult questions because you can’t leave an interview and regret not
asking something. What are they going to do, refuse to see you again? You can’t
just knock on doors, you have to bash them down and hold people accountable,
and I have a responsibility to do that.”

In her
professional career, Debora is looking to make full-length documentary films in
the future and is still hoping to interview Jacob Zuma and Robert Mugabe. “I’m
going to enjoy it while I can. I live through and cover the first drafts of
history. Also, I’m going to run forever and make sure I keep up the lifestyle.”