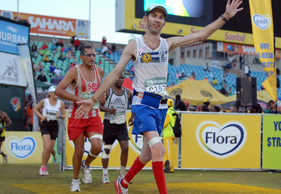 Back
in the early 1990’s, I became intrigued by this running race called the
Comrades Marathon. It caught my eye when an insert appeared on the TV revealing
the history behind this iconic race, and I saw the founder was an early war
veteran named Vic Clapham. Interesting, I thought, this gentleman had the same
surname as me. After doing extensive research via my family and the Comrades Marathon
Association, it came to light that Vic Clapham (Senior) was my great-great
grandfather, and I learnt that no Clapham family member had ever completed the
Comrades – Vic Clapham (Junior) had attempted the ‘Down Run’ in the 1930’s, but
did not finish.

So,
after years of watching this awesome race, both on TV and from the roadside, I
decided at the age of 34 to attempt running it. I did all that was needed to
start my journey: I found the right club, one that had history behind it, a
family club, the Natal Carbineers. It appealed to me because of Vic being in
the First World War. I was never the athletic type at school in terms of
running – I preferred cycling – but over time, with the help of dedicated,
friendly clubmates and other friends, I quickly learnt the tricks of the trade.
So in 2011, I was in Durban for the start of my first ‘Up Run’ to
Pietermaritzburg.

Words
cannot explain what I felt that morning standing amongst 18 000 runners,
singing the National Anthem and hearing Chariots
of Fire. Whilst en route to Pietermaritzburg, it felt so different being on
the road than watching it from the TV or roadside, so much more alive. Much to
my joy, I managed to work my way past Drummond, but unfortunately, I did not
make it to the finish – but any disappointment was shortlived, and by the time
registration came around for the 2012 ‘Down Run,’ I was ready to give it a
second try. I qualified again by running the Maritzburg Marathon, with a
slightly better time, and then I counted down the days to 3 June. This would be
my year to shine, and my goal was to earn a Vic Clapham medal.

In
2011, amongst all this craziness, I went to a meeting at Natal Carbineers one
Friday evening to hear about this movement called Red Sock Friday. I met an
awesome, inspiring young man, John McInroy, the visionary behind ‘I Wear Red Socks
on Fridays,’ and I was absolutely blown away by his story. I knew instantly that
a connection had been made, and that bond has just grown stronger over time.

The
big day finally arrived: Sunday 3 June, Pietermaritzburg City Hall,
the start of Comrades 2012. The atmosphere was electric, and I was proudly kitted
out Natal Carbineer colours and wearing my iconic “shooops” socks. The anthem
was sung, Chariots played out and the
goosebumps kicked in. I was determined to reach the stadium in Durban. I had
met up with a fellow Carbineer, Shannon Smith, at the start and we made a pact
to try and stay together until the finish. We paced ourselves perfectly and I
was feeling confident and positive, and the day became even more inspiring when
I ran past other runners wearing red socks.

Coming
into Drummond was awesome, because it meant that I had left Pietermaritzburg
behind and was destined for .
I continued along the route, enjoying the cheering from supporters, but the
real crunch arrived when I shuffled down Fields Hill. The 10km to go mark came
and I knew I was almost home, so I carried on in agony, realising my first
comrades was almost in the bag. Then, with just 3km to go, I decided to walk to
the stadium, as I knew I was home safe.

I
was amazed at the atmosphere within the stadium and what an awesome feeling it
is to run to the finish line. At last, I crossed over the final mat in 11:29
and ‘air-punched’ in excitement. Just after this, I met up with fellow finisher
and ‘Red Socker’ John McInroy, who happened to be waiting for friends to come
in. We just hugged each other in excitement to celebrate me finishing my first
Comrades. It was then that it sunk in that I had just made history: I am the
only Clapham family member to successfully complete the Comrades!

I
had conquered Comrades 2012, running it in memory of my great-great
grandfather, and accepted my Vic Clapham medal, in my Carbineers colours and
red socks, with much pride and jubilation. Long may Vic’s vision live on!