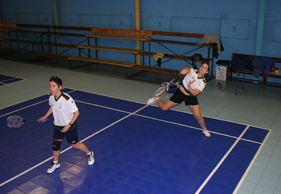 When
Team SA was announced in June for the London Olympics, four badminton players
had cracked the nod, a men’s doubles pairing of Dorian James and Wiaan Viljoen,
and a women’s pairing of Michelle Edwards and Annari Viljoen. Dorian played in
the 2004 Athens Games, while Michelle went to Athens as well as Beijing 2008,
but for the Viljoen siblings, it will be a first taste of Olympic action, and
Annari is naturally even more excited to be going with her older brother: “Very few
people can say they went to the Olympics, even less with a sibling and both
competed.”

Both pairs won their African continental preliminaries
at the Thomas Cup (men) and Uber Cup (women) and played in the finals in China
earlier this year, having already won the All African Champs in Morocco last
year, and that saw them included in the SA team for London. “The day I heard I
had qualified was the best day of my life,” says Annari. “I started playing
with Michelle in 2009 and the last few years have been hectic as we’ve played
as many tournaments as possible to get a higher world ranking, because we had
to be continental champs with a world ranking in the top 50 to qualify.
Michelle has loads of experience, and I’m still learning from her each time we
play together.”

Annari,
who is the current SA singles champion as well, works as a fitness manager at
the N1 City Virgin Active gym in Cape Town. She says her working environment
makes it a bit easier to build and maintain the running fitness that is an essential
part of her training, as she can easily training on the treadmills in the gym,
although she prefers getting outside in the fresh air. “In singles you need
more endurance, as you have to cover the whole court, but in doubles it is more
about explosive speed, so I need a combination of endurance and speed work.”

“Michelle
and I do long runs of 5-10km each Sunday in the off-season break in
December/January, to build base fitness, but then we focus on sprint and
interval work the rest of the year. A typical interval session is a hard run at 95%
intensity for 45 seconds, then slower for 15 seconds, and repeated 20 times.
That is like a badminton rally with a short breather between points to fetch
the shuttle. We normally do speed sessions twice each per week, plus we follow a gym
programme, and we train every weekday from 9am to 11am on the court to work on
our shots and combinations, as well as ‘sparring’ against other players.” This often
sees them playing against men in order to raise the intensity and speed of
their practice matches.

When
asked if she enjoys all this running, Annari quickly nods her head. “I do enjoy
it, but it is hard, because every time I run I put in 100% intensity. It is
always about pushing myself harder in order to help my badminton. If I can say
after a run, ‘well, that wasn’t too bad,’ then I obviously haven’t pushed
myself hard enough. One day I would actually love to just jog for a change!”