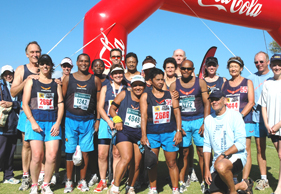 The
Pinelands Athletic Club dates back to 19 August 1937, when 21 local residents
met to discuss a proposal for a new club by Gifford ‘Penty’ Pentland-Smith, a former
member of Celtic Harriers. The proposal was accepted and training began with
early morning sessions on a field that became the Pinelands Cricket Oval –
which is still home to the club today – and the athletes had to share the field
with the horse-riding Earl of Athlone, Governor General of the Cape, and his
wife Alice. Over the next 40 years, many Springbok athletes ran in the dark
blue vest and light blue shorts of Pinelands, including George Munnik, John
Anderson, Edna Maskell, Brenda Parkinson, Donald Macdonald, Anne McKenzie,
Heide De Kock and Freddie Williams.

When the
global Running Boom took off in the late 70s, ‘fun runs’ became popular in
South Africa, so the club formed its Pinelands Plodders section. Initially kitted
out in bright yellow T-shirts, many of these joggers then graduated to full
membership and blue club vests, including current Club President Kaare James
and his wife Marlene, who is the current club secretary.

“Marlene
and I joined the Plodders in 1978 and I ran my first marathon in 1979 at the
Kellerprinz Winelands in Stellenbosch. I’m still going strong and last year I
did my 30th Two Oceans, while Kenny Williams ran his 30th
this year,” says Kaare. “I’ve seen the club grow a lot and change a lot over
the years – it started with a family gathering feel about it, then became a lot
more serious in the 1980s, and then went back to more of a social club, and today
we have about 220 members.”

WINGS ON THEIR FEET

In 1983,
Dave Spence was appointed as Head Coach and under his guidance a number of
Pinelands athletes posted outstanding results, including the late Welcome Nyoka,
who was Western Province (WP) champion in road, track and cross country in the
80s. Then in the 90s Makhosonke Fika represented SA on the track and road as
well as in cross country, including the IAAF World Champs Marathon, while Nancy
Will won many WP titles and set many WP records from 10km to the Comrades.
(Dave was also coach to the ‘Flying Policeman,’ Johan Rossouw, who set the SA
100m record of 10.06 seconds in 1988, which still stands today.)

“Cross
Country was a big favourite of Dave’s, and in 1987 Pinelands dethroned
Stellenbosch University of the WP Cross Country title for both men and women,
and we held these titles on and off for the next 10 years,” says Kaare. Today,
although Pinelands is regarded predominantly as a road running club, there are
a few members who participate in track and field, including the club’s oldest
member, 92-year-old Philipp Frech, who holds world records in shot put and
discus in his age category. A trio of 80-year-olds, Borg Stannuis, Steve
Johnston and Neville Sharpley, are also active, while the slightly younger Robin
Buck still regularly wins long jump events.

Morning
club group runs take place from Monday to Friday at 5:15am, and in the evenings
there are 10km runs on Monday and Wednesday and a hill repeat session on
Tuesday, all at 6pm. The club’s 2.5km or 5km time trial is run on a Thursday
evening at 6pm, and usually attracts between 60 and 80 athletes. Young runners
are catered for with a four-lap 2.5km course on the cricket fields, to keep
them off the roads. “The social vibe at our club is great, especially
on Thursday nights after the time trail, when meals are on sale, and we get not
only our club members attending, but also local residents and members of other
clubs,” says Kaare. The second Thursday of each month is Club-Nite, and other
social activities include bring-and-braais, Trivial Pursuit evenings, scavenger
hunts, the annual President’s Breakfast Run and the annual awards dinner dance.

Each year Pinelands
organises the Asics Hohenort 15km run in February in Constantia, the 5x3km
cross country relay in April, which traditionally kicks of the WP cross country
season, and the McKenna Scott 10km in Pinelands in August. This third event
will form part of the club’s 75th Anniversary celebrations:

?
5 August: Mckenna Scott 10km – the
finish will be lined with special balloons.

?
31 August: Dinner/dance at the
Pinelands Town Hall for members & partners.