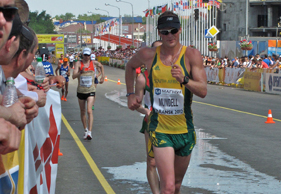 I
had pre-qualified for the World Cup after winning the South African 50km
Championships in Cape Town in October 2011, clocking 4:22:12. I set about my
training with a ferocious intensity, building up my strength and core stability
through a vigorous gym and cybex programme, coupled with core stability classes
and regular sports massages. I managed to clock over 2500km in 23 weeks from 5
December (averaging 110km/week), and in the final four weeks before the race, I
had recorded personal best times over 10km on road (43:14) and track (43:45) in
addition to 20km road (1:26:35). My training sessions were regularly at the
necessary race pace (4:46/km) required to achieve the IAAF A standard of 3:59:00,
as required by both ASA and SASCOC, so I was really confident going into the
race.

I started off conservatively,
walking within myself and in a group that I felt was on course for the A
standard. We started increasing the pace from 10km in the warm conditions on a
challenging course in downtown Saransk, situated approximately 700km south-east
of Moscow. Our group of three went through halfway in 1:57:30 and I was on course
for a 3:55:00. We increased the pace slightly, going through 30km in 2:20:43,
which was also a personal best. The heat throughout the race was a constant
concern, though, and I regularly sponged my body, pouring bottles of water over
my head at each of the water tables. I owe a great deal of gratitude to my
experienced seconding team that supported me throughout the race, team coach
Carl Meyer and team manager Oliver Mundell, representatives of the SA Race
Walking Committee and veterans themselves of the 1993 Race Walking World Cup in
Mexico.

I suffered muscle cramps from 33km
and my pace slowed, so at 38km I had exactly one hour and five seconds in which
to complete the final 12km. I was encouraged by my team mates that were strewn
around the course in addition to my international race walking friends, and I
had to dig really deep for the final 4km after the leaders had lapped me for
the second time. This was my only chance for Olympic qualification and I had to
trust in my training and my mental willingness to embrace the pain and to take
my body to a new level of discomfort, whilst many athletes were suffering
around me.

I finished in 3:57:57 and 26th
place, recording 10km splits of 47:15; 46:50; 46:38; 48:09 and 49:03. I had
recorded a new personal best time, national record and African record, and in
so doing, achieved my first IAAF A standard, thus meeting the ASA and SASCOC
Olympic criteria! I also became only the second athlete from the continent to
break the four-hour barrier, and the first ever to record an IAAF A standard
over 50km. I was completely elated and tearful after the race, knowing that I
had just qualified. The realisation of a childhood dream is without description
and it is a moment in your life that you can never really prepare for.

It was surreal to arrive back in Johannesburg
to TV crews from the SABC and SuperSport, and then to be contacted by
journalists and radio presenters the entire week. I have never experienced this,
and it was truly fantastic. I am so looking forward to representing not only
myself but South Africa in London, and want to thank everybody that made it
possible for me to get there, my family, girlfriend, friends, training
partners, coaches, sponsors, employers and more. I think I’ll only believe it
fully when I am standing on the start line in London on Saturday 11 August.

Fifty-two years ago George Hazel
represented South Africa in both the 20km and 50km race walking events at the
1960 Rome Olympics. I hope that my participation in 2012 will kindle a new
generation of young South African race walkers that will aspire to compete on
the international stage. I later learnt that my performance in Russia could also
qualify me for the 2013 IAAF World Athletics Championships in Moscow, so I am looking
forward to the coming years!