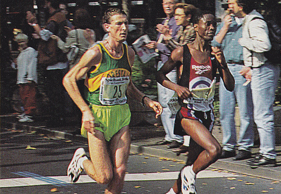 1987
is considered one of the greatest years in South African athletic history, due
to the records and performances by various athletes, including the incredible
world record 1:00:11 tied finish by Matthews Temane and Zithulele Sinque in the
SA Half Marathon Champs in East London. Another of the leading characters in that
dramatic year was Xolile Yawa, who set two SA 10 000m records that year, bringing the
mark down to 27:39.65, which stood for nearly 12 years and has only be beaten
once, by Hendrick Ramaala.

Xolile’s
record is considered by some pundits to be the absolute highlight of that great
year. He also inflicted a crushing defeat early in the year on Temane and Matthews
‘Loop en Val’ Motshwarateu in the Momentum Life Half Marathon in Bedfordview,
winning in a stunning 62:37 at altitude. That run prompted much speculation in
the media about a possible world record at sea level that year, which is
exactly what transpired, although Xolile had to settle for third place in a
personal best 1:00:56 in that race.

ONE OF THE BEST

Xolile
can look back on an incredible athletic career. He won an unprecedented nine SA
10 000m titles, including six in a row from 1985 to 1990, and two SA Half
Marathon titles in 1986 and 1988. In 1989 he set an SA 15km record of 43:02,
which has only been beaten three times since, and by no more than four seconds.
Then in 1992 he brought home a bronze medal from the African Champs 10 000m,
made the final of the Olympic 10 000m, and represented SA in the World Half
Marathon Champs. The following year, he won the Berlin Marathon, and went on to
represent his country again in the 1996 Olympics and 1997 World Champs
marathon.

Born
in the remote village of Lady Frere in the Eastern Cape in 1962, Xolile recalls
that as a young man he felt he was carrying the aspirations of the Eastern Cape
when he competed. In the early 1980s, the Eastern Cape was the poor relation of
the then Transvaal, whose powerful teams were dominated by athletes from the Highveld
gold mines, including the incomparable Matthews Temane. Xolile’s rivalry with Matthews
was characterised by deep respect and Xolile unshamedly admits he idolised Matthews,
although he was a mere two years his senior. “I found Matthews completely
without arrogance and approachable. We had long chats about running and he
would help with a running tip here, a training programme there.”

Xolile
at first felt completely overshadowed by Matthews, who he believed was
unbeatable. “Matthews won so many races with his famous kick,” he explains.
However, while running for the President Brand mine in the Free State, Xolile noticed
that Matthews was vulnerable in the longer distances. Adopting the devastating
front-running tactics which became his trademark, Xolile found he could get the
better of Matthews over 10 000m, which saw him win a breakthrough SA title in
1985.

In
a sport in which a distressing number of former champions have succumbed to
poverty, alcoholism and early deaths after retiring from competitive athletics,
Xolile is a triumphant exception. With his 50th birthday
approaching, he is co-owner of Carecure, a hospital management company active
in four provinces, and he recently started a project, Legendary Athletes of SA,
catering for the social welfare of former athletes, coaches and officials.
“Some athletes are so poor when they die, there is not even enough money to
bury them,” he says wistfully.

Now
settled in the Free State, with his son at Grey and daughter at Unisie, the
soft-spoken Xolile is outspoken about the current malaise in SA distance
running. “We could compete with the Kenyans and Ethiopians if our full pool of
athletic talent was harnessed. There are many kids out there who could be world
champions if they were given the chance. We must try to get the sport back to
where it was in the 80s, when it was in the top five South African sports. The
contribution of the mines, Correctional Services and Defence Force as well as
the universities in the old days was so important, and we need that again.”

Richard
Mayer is author of Three Men Named
Matthews: Memories of the Golden Age of SA Athletics, available at
Exclusive Books or www.redpepperbooks.co.za.