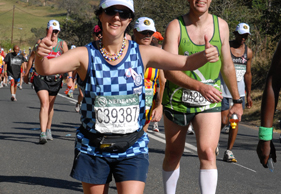 Back in June 2005, Tracy Bamber had
never been a regular runner, having only run occasionally, but she wanted to
become more active, so she set herself the challenge to run the 56km Old Mutual
Two Oceans Marathon the following year. However, a work colleague pointed out
that it would be impossible, as she had no running experience whatsoever, and
the Two Oceans was no joke, and certainly no race for a beginner.

The final conclusion of the
conversation was that her colleague would give Tracy R20 000 for her chosen
charity if she completed the 2006 Two Oceans. Tracy decided to take that
life-changing bet, and the next day, it was all set in stone when she presented
her colleague with a contract to sign. Then off she went to lace up those
running shoes, because this was a bet she was determined not to lose!

During one of her very first
training runs in the Morningside area of Johannesburg, Angus Hudson came
cycling towards her and asked her whether she was on her way to the time trial.
“What time trial?” she responded. Angus explained that he was starting a new running
club in the area and so Tracy became the first signed up member of Morningside
Running Club. “Angus was my biggest supporter in the beginning. He ran my first
half marathon with me, my first 32km and my first full marathon as well, and then
Two Oceans, which enabled me to win the bet and raise my first funds for
charity, which I donated to The Children in the Wilderness charity. Without him,
I don’t think I would have been able to do it.”

But that was just the start of her
ultra career, and of her fundraising running efforts! Since that first Oceans
ultra in 2006, she has gone on to finish the Cape ultra seven times, and has
just run the Comrades for the sixth time as well, and the sponsorship she
sought for her running has seen her raise over R650 000 for the three charities
she supports, Children in the Wilderness, The Wilderness Trust and the Comrades
AmaBeadieBeadie Charity. Tracy has focused most of her efforts on Children in
The Wilderness, which works to educate the children in African countries about their
surroundings and nature conservation. That not only helps protect the
environment, but also creates a substantial amount of job opportunities for these
children as they mature.

Tracy says she will carry on raising
money as long as she does the Comrades, and says she just takes each year at a
time and never plans too far ahead. “I call myself a plodder. When it comes to
Comrades, it is more about the camaraderie of the day to me instead of doing a
good time, although I do like to improve my times generally. I just like to
cross the finish line in a healthy state, achieving my goal in raising money
for the less privileged. I am privileged enough to be able to run these events,
so why not help the less fortunate in the process. Raising money by running is
just doing good, by being out there helping yourself and others. I am
exceedingly grateful to be able to run and raise funds for those in need.”

Since making that bet in 2005, Tracy
made running a permanent part of her life. “I just think running is an amazing
leveller. It doesn’t matter if you are the CEO of a company or what you do,
everyone is there to run. You are no better than the next person. Everyone who
crosses the finish line is a winner to me.” And when it comes to support, Tracy’s
husband Jonathan is her biggest fan. “He’s always giving me words of
encouragement, and then patiently waiting for me at the finish line of the big
ultras. My training partners and Morningside Running Club have also kept me
going on the harder days, and helped me reach my fundraising goals.”