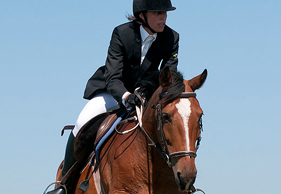 At
the 2000 Sydney Olympics, a women’s competition was added to the modern
pentathlon for the first time, with the 24 top-ranked women in the world
invited to participate, including South Africa’s Karina Gerber. She finished 18th
and was determined to get back to the Games to give it another shot, literally
and figuratively, making huge sacrifices along the way in pursuit of her sport,
but things have unfortunately not quite worked out for her. Thus she won’t be
lining up in London for the 2012 Games, having also missed 2004 and 2008, but
she remains upbeat about her somewhat unusual sport.

FIVE OF THE BEST

Modern
pentathlon is a five-discipline sport consisting of ?p?e fencing , 200m freestyle swimming, show jumping and a 3km cross-country run with pistol shooting mixed into it. The sport was invented in 1912 by Baron Pierre de
Coubertin, founder of the modern Olympic Games, and was
based on the ancient pentathlon, which consisted of running,
jumping, wrestling and throwing the spear and discus – all skills a soldier of
that time needed. The event was considered the climax of the ancient Games,
with the winner ranked as Victor Ludorum
(Winner of the Games). In the modern version, the Baron wanted to simulate the
experience of a 19th century cavalry
soldier trapped behind enemy lines: He must ride an unfamiliar horse, fight
with pistol and sword, and swim and run.

Originally the competition took place over four or
five days; but a one-day format was introduced in 1996 to make the sport more
spectator-friendly. That was the same year Karina became aware of the
sport and immediately fell in love with it. “I came from a swimming and running
background, so in 1997 I started fencing, shooting and horse riding. It was a
huge undertaking, but by 1998 I had competed in my first international
competition for South Africa and qualified for the World Championships in that
year. And after only three years in the sport, I was the first South African
woman to compete at Olympic level.”

“It’s
an incredible combination of physical, mental and intellectual aspects, as well
as adaptability, since we have to do the show jumping on a horse we only meet
20 minutes before riding,” says Karina. “It is also a most challenging sport,
as you have to find time to train for all five disciplines, then bring them all
together on competition day, which takes a lot of planning and determination.”

Karina (34)
hails from Pretoria, where she studied adventure tourism, and now lives in
Stellenbosch, but for the past seven years she has spent more time in London
than at home, training there while working to earn enough money to fund her
participation in the sport. “I wanted to qualify for the 2004 Games in Athens,
but couldn’t because my federation had no funding for me and I was already too
deep in debt to fund it myself. Competing in the 2000 Games had set me back
more than R60 000 and I was still working to get rid of that debt, so I gave up
competing and went to work on a cattle farm in the United States.”

“I tried to
make peace with the fact that taking part in the Games was something of the
past, but I felt I owed it to myself to try and compete at one more Games, and
before I knew it I was training full-out again for the 2008 Games. I have no
doubt that I could have qualified, but early in 2008 I fell off my bike in
London and tore the cruciate ligaments in my knee, so no more Olympics for me.”

LAST STAB
AT IT

Having set her sights on going to London for the 2012
Games, Karina was on track to qualify, but bad luck once again struck. “I ended
the past international season with a third place at the African Championships
in in July., but then
in my first international competition after that, in in March, I fell off
the horse and fractured the radius of my right arm. Even though I had three
more qualifying competitions to go, including the World Championships in Rome in
May, there was no way I would be able to learn to fence left-handed in two
weeks and swim with just one arm pulling, so I knew my Olympic dream stopped
right there.”

Having now decided to retire from top-level
competition, Karina says she will now focus on developing the sport back home.
“I want to concentrate on coaching the next generation of South African world
championship contenders and hopefully Olympic medallists.”