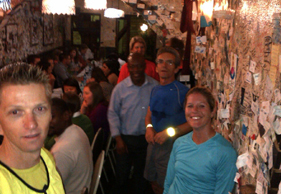 Norrie Williamson was on the phone: “Hey Ray, a few of us are heading to Soweto tonight for a run, if you’re not doing anything?” If I’m honest, my first thoughts were, “Are you crazy? At night? Is it safe?” But I’m up for anything that involves running… – BY RAY ORCHISON

I
grew up in Apartheid-era South Africa, and although I was too young to know
what was going on around me politically, Apartheid had an impact on my young
mind. Nothing was questioned, that was just how it was, and white people never
mingled with black people. Sadly, I matriculated in 1994, just before schools
officially became multi-racial, so I never had the opportunity to share at a
close personal level with people of other races. Through the years I have worked
and mixed with different races, so I don’t consider myself racist, although I
would be lying (I think all of us would be) if I said I don’t struggle with
prejudice. So, with those thoughts in mind, here was this ‘mlungu’ (white
person) driving into Soweto at 7pm at night.

MADE TO FEEL WELCOME

I
met the six other runners at Nambitha in Vilakazi Street and the wonderful
experience began. As we got out of our cars, a local ran up to us, extended a
hand and proceeded to sing us a song. Shortly after that a very excited woman
came running up to us, literally screaming with joy, “Hello, white
people!” Again it was handshakes and hugs and smiles, like we had come
across a long lost friend. Then she shouted across the road, calling her husband
and four-year-old son to come see us. Her son stared at us as though we had
just landed in a space ship. Then again, most of us were wearing tights and
bright reflective clothing, and two even had headlamps on, like we were going
mining or something.

We
started up Vilakazi Street and turned into the road which saw protestors
marching in the opposite direction in the 16 June 1976 Soweto Uprising. We
passed Morris Isaacson High School, where the uprising began as thousands of students,
teachers and others led by Tsietsi Mashinini began their protest march against
the Afrikaans Medium Decree of 1974, which forced all black students to be
taught in Afrikaans. We also stopped at the Hector Pietersen Memorial, which
has a grass line pointing to the spot where the 13-year-old student was killed
when police opened fire on the protesting students that day.

We
stopped off at Wandie’s Pub, and what a wonderful man Wandie is. After buying a
beer, Norrie jokingly asked him why the beer was so expensive…”How else am
I going to get rich?” he responded. And we finished our run back in Vilakazi
Street, passing the family houses of Desmond Tutu and Nelson Mandela.

The
truth is, I felt safer running in than do I running in some white residential areas. I never gave my car a single
thought during the run, and there was never a moment when I feared being
attacked or mugged. Just about everyone we ran past would wave, flash a smile,
or even join us for a few strides. We even got a quick apology when a car
turned into the road and didn’t see us – very different to the areas I normally
run in, where you get the middle finger and verbal abuse! I will definitely be
going back to Soweto, for a warm meal at Wandie’s, for another jog in the area,
and simply to enjoy some great company.