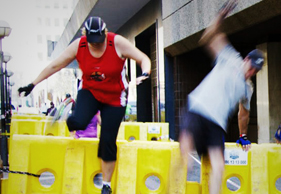 Jump City
GP in Newtown on a magnificent Sunday, in what should have been a cold winter’s
morning, was hands down one of the most interesting events you could wish to
do! The few technical glitches were managed very well, but with all athletes
fully aware that this was the first event of this kind, nobody was getting edgy
about the slight delays. Starting the race slowly, as I had been advised, was
the best thing I could have done. Although I wormed my way to the front of the
start along with the rest of the individual athletes, the boys all took off
with gusto while I maintained a smoother pace with the knowledge that I had a
long way to go.

The event
was a 10km course through downtown Jozi, but in the early morning hours, Newtown
felt very different. Being a Sunday start meant that most of the traders were
closed for the day, so not much was going on around us and traffic was lighter
than normal, but the Metro Cops were still out in force to help the athletes across
a few roads, and the few members of public out that early must have been fascinated
by a bunch of scantily clad runners bouncing off their pavements!

But best of
all, added to the challenge of getting through the city in one piece, we had to
make our way through and over some interesting obstacles! These included
netting that you had to crawl under and some cable barrels, tire obstacles,
high bars, and plenty of walls, jumps and ramps that required some skill to run
up and jump onto. The urban street running obstacles included parking garages,
pavements, the Nelson Mandela Bridge and some interesting stair climbs in and
around the city.

It always
amazes me when doing these events how little we stop and marvel at the beauty
around us. Like the inner city refurbishments and older buildings that mostly only
tourists get to see, yet as residents of this city, we seldom take the time to
go see what we have right under our noses. The South African history is
stunning!

Apart from
the novelty of doing an event through Newtown and seeing the beautiful
buildings and architecture up close, there were unfortunately also some eye
openers: Seeing the homeless still asleep on the pavements, a few junkies here
and there, and the vast litter on the streets.

Looking
back at the day, I was humbled by the organisers and sponsors that gave us this
opportunity and gave the time and means for 1 000 athletes to be part of the
event! Ironically, people organise events such as this out of passion, but in
doing so, usually don’t get to do the actual events themselves, so a quick
thanks to Gavin and Chris, who ran around organising and MC’ing so we could
have fun! In terms of the sponsors, Turbovite were the headline sponsor for the
event, giving us samples in the goodie bags. along with Nativa, DoITNow
Magazine and 100Plus, who kept everyone refreshed.

Having had
so much fun, now I am looking forward to the next one, so bring it on guys!