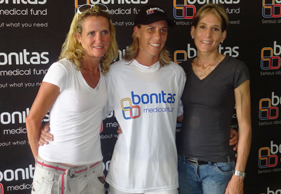 When Kerry Koen (36) came home sixth
woman overall in 6:45:45 and first South African female finisher in the 2012
Comrades Marathon, it was rich reward for the hard work she has put into her
running in recent years. This has seen her steadily climb the rankings, and the
podium, in local races. But it was also a far cry from her first ever race,
which she ran when still at varsity. It was not a 10km, or a 15km, or even a
half marathon… No, she went for it, all or nothing, by entering a full
marathon, rather a daunting challenge for someone who had just started road
running.

A couple of varsity friends were
planning a trip down to Durban to run this marathon and Kerry thought it
sounded like a pretty fun idea at the time, even though the longest training
run she had done up till then was a mere 14km. “Ignorance was bliss, and I
ended up finishing in agony in 4:12,” says Kerry. “I realised that I needed to
take on a more thorough approach to my running and started doing the shorter
distances to build up to the marathon once again.” That eventually saw her move
up to the ultra-marathons, and her running career has been flying ever since.

From a young age, Kerry competed in
all the sporting activities that were on offer at Howick High School in the
KwaZulu-Natal midlands. Including swimming, hockey, tennis, athletics and
gymnastics, Kerry was always sure to be taking part in something. Her father
was a Springbok yachtsmen and her mother represented her province in swimming,
diving and gymnastics, so sport always came naturally, and Kerry says her
parents played a pivotal part in her success, and she considers them mentors in
her running career.

It was at varsity that Kerry
discovered that she preferred the individual sports over team sports. “Relying
on yourself to both train and compete alone added flexibility, but also the
pressure to perform was self-inflicted and self-controlled.” says Kerry. She
then took on road running, and despite that first, near disastrous marathon,
she was soon achieving a couple of podium finishes, which ignited a hunger in
her to improve her running ability and her personal best times. “I kept
challenging myself to reach new PB’s,” she says.

Then in 2007, a few days prior to
Comrades Marathon entries closing, Kerry decided to take on The Ultimate Human
Race. At the time she was training long distances with a couple of guys who
were preparing for Comrades, and based on the fact that she had kept up with
them and done the same mileage as they had, she decided to enter Comrades with
them. She was physically ready for this challenge, but during the race she
realised she was not quite mentally prepared for the gruelling challenge. “I
missed my target of a silver medal by only a few minutes, which I was sad
about, but in hindsight, I was very happy that I had managed to keep going and
get so close!”

That first 7:36:49 Comrades time saw
her finish 19th women overall, and a year later she had moved up to
18th with another Bill Rowan medal. Then in 2009 she was 11 in
7:18:51, just outside the gold medals, and that really made everybody sit up
and take notice. Having been running for Collegian Harriers, she was now signed
up by the Nedbank KZN club ahead of the 2010 season, but she didn’t have such a
great Comrades that year, finishing 30th in the women’s race. The
following year was to be her real breakthrough, as she came home ninth for her
first gold medal in 6:56:21.

Kerry also enjoyed other success in
2011, placing first in the Umgeni Water Marathon, Bergville-Ladysmith 52km and
South Coast Marathon. After her top 10 at Comrades, she was then selected to
represent her country at the World 100km Champs in the Netherlands and ended up
finishing ninth. “It was a wonderful experience to represent South Africa. The
course was not easy as it was flat, flat, flat – 10 laps of 10km with just two
metres of altitude change. Being used to the spectacular racing routes on offer
in South Africa, and our hills, the boring route made it particularly tough
mentally, and spectator support was also almost non-existent compared to what
we are used to in South Africa. I love the support on the Comrades route, which
helps me to live in the moment of the run, and motivates me to pick up the
pace.”

And then came the 2012 Comrades. Now
running in the colours of Bonitas, who she joined during 2011, Kerry came home
sixth overall and first South African, and says everything went perfectly from
start to finish, as she had done the mileage and was mentally confident of
achieving her goal. Still, she admits that she never quite realised just how
well she was really capable of doing and exceeded her own expectations in this
years Comrades marathon. “I never expected it, but my running friends and mentors
have never doubted my ability to improve. If it were not for their belief and
persistence to make me believe, I never would have pushed myself out of my
comfort zone the way I have.”

When asked if her 2012 achievement has changed
her life, she responds with a yes and no answer. “There is more attention, but
life is still pretty much the same. I am still me and I hope it remains that
way. If anything, the changes have come in me being able to share inspiration,
advice and making new friends. Not only from me imparting the inspiration and
advice on to others, but others passing things on to me too. There is always so
much room to grow as a person and as an athlete.”

Kerry works as a research scientist in
Pietermaritzburg and is the mother of Luke (9) and Emma (7), both of whom are
quite sporty. She says her kids are very proud of her and they seem to
thoroughly enjoy her success. In her spare time she loves to go ride her
mountain bike with the kids in the scenic plantations outside the city. They
also love to go for runs around the block, and on sunny days, to read their
favourite books in their garden.

These days, Kerry says she prefers trail running
to the road, even though the Comrades is such a focus for her, because the
trails are more beautiful and more challenging due to the technical nature of
the courses. She lists the Three Cranes trail run in Karkloof, organized by
Wildlands, as one of her favourites. “I would love to represent SA on the
international trail running circuit one day. There are so many ultras and
multi-stage events locally and internationally that sound so exhilarating. When
the time permits, I will be very eager to do this.”