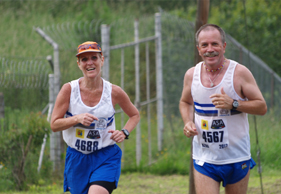 The Natal
Carbineers regiment of the SANDF not only boasts a long, glorious military
record, but can also look back on a rich athletic history. The first recorded
training session of its athletics club dates back to 28 April 1865! During the Second World War, the
Natal Carbineers athletes acquitted themselves with great distinction in the
Eighth Army Games in North Africa and Italy, and after the war in various
inter-regimental meetings, but club activity lapsed in the 1960s due to the
regiment often moving about.

In 1991, the club was put back on its feet and in
order to get enough members together to be allowed back into the sport, the
regimental commanding officer and other officers all signed up, even though some
of them never actually did any running – but the club had that same can-do spirit of the
1860s. Today, the club is
an open one and no longer reserved only for members of the regiment, but
many of the 200-odd members
have ‘Carbineer blood,’ so to say, having grown up in the club after
following their parents into running.

In 1930, a
young Carbineer, Phil Masterton-Smith, aged 17, took part in the Comrades
Marathon for the first time. After a superb run, he finished a mere 200 metres
behind the great Wally Hayward in the first of his five wins! After the race,
Wally said, “If I have to run so hard to win this race, I’ll never run it again!”
and it would be 20 years before he did line up at Comrades again, which can
partly be attributed to a broken foot the following year and then a focus on
other running goals, but also due to the strength of that chasing Carbineer!

In 1931 Phil ran his second Comrades and became the
youngest ever winner of the great race, beating another Carbineer, Noel Burree,
by the narrowest of margins after an incredible sprint finish. The few old
photographs of this race show the two straining every muscle down the home
straight of the track, and at the line it was Phil who just edged ahead to win
by a few metres. In 1932 he finished sixth and then in 1933 he took 10th
following a nine-day day cycle from Cape Town to arrive in Maritzburg the day
before the start! Today, the fundraising Unogwaja Challenge is held in his
memory, with a group of riders repeating his cycle trek and then running the
race. Also in memory of the great Carbineer, Phil’s badge is worn on the club
vest today.

The Carbineers are well known for the brilliant
races they put on. Back in the 90s, they presented the ‘Race of the Dekade
10km’ (sponsored by Dekade Paints), which won the award for best organised race
in the province before being retired in 2001, and today the club hosts the Maritzburg
Marathon, Midlands 100 Miler and the Maritzburg Spar Ladies 10km. The club also
organises fun runs for its members, including ‘This Dam Race’ around Midmar Dam!

In between their own races, the members are often
seen at other races, and they also join up throughout the week at the
Carbineers Club or other selected venues for club runs, with different paced
groups setting out, as well as a walking group. Wednesday is the main club run day,
and on Fridays the club organises burgers or steak rolls for a social night
after the run. On the first Monday of each month, there is a big social get-together
at the clubhouse and all runners and walkers are welcome to join. The club also
holds a prize-giving once a year after Comrades, where ‘normal’ prizes are supplemented
with a lot of fun prizes, including the Nurse Jenny floating trophy for the
sickest person on Comrades day!

This is
also a club with a spirit of giving. It hosts the Pietermaritzburg Run/Walk for
Wildlife, and often assists neighbouring clubs Edendale AC and Orion AC with
their events. And speaking of giving, member Mdu Zondi organises shoe
collection and distribution to less privileged runners, while Lynton Kinloch
organises the Toys for Joy collection at Christmas, and these are then distributed
to children in the nearby township. Added to that, several members serve on provincial running committees
as well as various portfolio committees of the Comrades Marathon Association.
It’s all just part of the legacy and values of this great club!