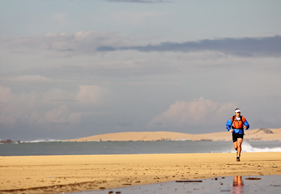 I
took part in the first running of the three-day MERRELL Xtreme trail run, slickly
organised by Liam Victor of Katliesure and Craig Muller of Backyard Adventures.
It took us 146km eastwards along the unspoilt Eastern Cape shoreline from the
East Pier in Port Alfred to Nahoon Beach in East London, stopping overnight at
Mpekweni and Kidd’s Beach. Our group of 12 full-distance runners was
supplemented by five “day trippers”, who each ran a stage or two. With
refreshment stations every 10 to 15km and carrying only what we wanted for the
day, the emphasis was on fun and finishing, rather than on racing, and with
Liam’s obvious delight in coming up with more goodies and surprises every day,
we ended up feeling like a bunch of spoilt kids out on the best seaside trip
ever.

The
run started literally with a bang in the teeth of a thunderstorm, with teeming
rain and a fierce westerly keeping us huddled in our cars until the very last
minute before the first 43km stage to Mpekweni Beach Resort. Fortunately, within
an hour the sky cleared, the rain stopped, the waves were sparkling and the
strong tail wind added an exhilarating touch to a beautiful day. Rising trail
star Hylton Dunn arrived first at Mpekweni in a blistering time of 3:36, with
the rest of us finishing within six hours. After an afternoon of rest and
recuperation, we came together again in the evening for a briefing of the next day’s
56km stage, dinner, lucky draws, and forfeits for “crimes” such as
lack of height, extreme youth, excessive speed, prolific chattering, even use
of hiking poles in a thunderstorm!

Day
two dawned fine and clear, and we set off towards Palm Springs Resort at Kidd’s
Beach. There was plenty to keep us interested between checkpoints: Wrecked
fishing boats, a couple of rivers to cross by jet-ski, one to swim, a massive
decomposing whale, seabirds, some intriguing mammoth winding gear rusting away
on the beach, and plenty of amazed holiday-makers asking us what on earth we
were doing. Hylton again showed a complete lack of respect for the distance, bounding
to the finish in 5:09, followed by the rest of us. Supper, prize giving and
forfeits took place this time at the vibey Beach House restaurant.

Day
three was full of surprises, starting with a full breakfast at the Beach House.
Obviously it was never going to be a racing day… except, of course, for
Hylton, who somehow missed that memo. Just outside East London we morphed from
a straggle of strandlopers to a platoon of urban warriors, running in a group
through the suburbs to the rowing club, where surprise number two awaited in
the shape of a luxury catamaran waited to take us down-river, where we invaded
East London in fine style, disembarking and jogging up the pier with Hylton
Dunn as our standard bearer, waving the MERRELL flag aloft. (He, just by the
way, had already run to the finish at Nahoon, and returned to the harbour to
fetch the rest of us.)

Surprise
number three was ice-creams at the beachfront Steers, owned by one of the
runners. As may be imagined, we were all feeling quite chipper by this time,
and the fun wasn’t over yet. Leaving the Esplanade and crossing the beach, the
MERRELL platoon trotted through the maze of cliff trails, along the tracks, up
and down steps, through the caves and coves and between the rocks and ridges
around Pinnacle Point to finally emerge onto the last stretch of golden beach
at Nahoon where a line of orange flags guided us to the finish and surprise
number four: Fresh, juicy Steers cheeseburgers, a cooler-box full of cold
drinks, and the presentation of our finisher’s jackets.

Hylton dominated the run whilst keeping himself
tightly reined in – it was, after all, a Comrades training run for him, and not
to be over-cooked! The rest of us were all winners. We left with our bags stuffed
with awesome goodies. We also left with our heads stuffed with wonderful
memories of a unique and Xtreme experience.