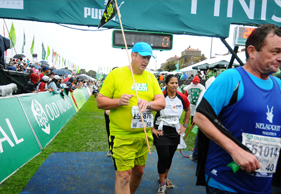 A
week before the race, I picked up a stomach bug, but felt OK when we left
Joburg on the Thursday night. However, on the flight I started having major
stomach cramps, and as we settled into our rooms in Cape Town, my cramps grew
much worse, so my girlfriend took me to the Cape Town Mediclinic. I was
admitted around 1am and hooked to an IV, and when we left at around 5am, I felt
like Superman!

We
woke up at 4am on the cold, rainy Saturday morning and made our way to the
start, and I held on to key of the rental car. I normally tie the key to
strings in my running shorts, and did the same that morning. Or so I thought… At
the 6km mark, I realised the key was gone. With thousands of people on the
beautiful course, there was no chance of stopping and looking for it, so I
spent the next 15km working on an excuse for losing it.

As
I neared the finish and experienced the extreme cold and rain, I knew the rest
of the group were waiting for me. I met up with my sister just before we
finished and broke the news to her, and together we tried to think of possible
solutions to the problem. The finish looked like a ghost town, with people
squeezing into tents to escape the rain, and our friends were not at the agreed
upon meeting point. We looked around for an hour, but couldn’t find them. They
had decided to queue for the shuttles to take them back to the parking area.
They were freezing and cramping… and waiting for the car key.

My
sister and I joined a couple to get a taxi to the car park, and they offered to
drive me back to the hotel. Meanwhile, the other three were still waiting for
the shuttles. I phoned Europcar and tried to explain that I didn’t rent a car
with them, but that I would like to arrange a second one because I lost the
keys of the car that my friend had rented. It took a while to explain why my
friend couldn’t phone them. Eventually, they sent out a wonderful gentleman
with a replacement car. He picked me up at the hotel, and arranged for the first
car to be towed. Meanwhile, I phoned the taxi driver from earlier and asked him
to go look for my friends, and at 3pm they reached the hotel after a long, cold
day. At dinner that night, we all agreed that it was a weekend that we will
never forget. And we are definitely going back next year!

Years ago at a Two Oceans
pasta party, I sat next to Big Dave Coetzee from KZN, talking about him pacing
the sub-3:00 bus. Such a slow, boring pace, I though… No pressure, I thought…
but here I was at the start in 2012, with a sub-3:00 Puma Pacesetter flag. Boy,
was I wrong about no pressure! – BY WILBY
STEENKAMP

Crossing the start line already 4 minutes 56
seconds behind schedule and going through the 1km marker on a ridiculous 15 minutes
prompted numerous questions from the athletes around me: “Are we going to make
it?” or “Will the bus get us there on time?” We soon started picking up the
pace, but now the questions became “How many races have you paced?” and “How
many Oceans halves have you done?” They were obviously looking at the number 2
next to 21km on my race number, and my unique physique. It was only when I
answered about 50 and 192 that I started gaining their trust.

At 8km we were only 1:10 behind and the bus started
cruising at sightseeing speed. The rain at 9km was a shock, but we cruised up
Southern Cross Drive, walking two minutes, jogging one minute. Going downhill
to Kirstenbosch, the passengers in the bus started to realise that 8min/km would
take them to an easy finish. At the 17km marker, I jogged back for 500m to get
as many new passengers as possible on board, and some athletes were very
confused with this bus going the wrong way! I made a last call on latecomers at
20km and then we slipped and slid in on 2:59:24. It was a great day for me as a
pacesetter, and I am thankful to PUMA for making it possible.