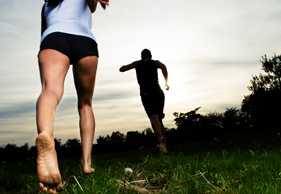 Open
any running publication or go online these days, and you will be bombarded with
messages about the benefits of barefoot running. Walk into running stores and
you will find more and more barefoot technology, or minimalist shoes, some with
soles so thin that you may as well be barefoot. And give a barefoot/minimalist
running fan half a chance and they will tell you that everybody should be
running barefoot!

The
problem is, while there are definite benefits to be gained from running
barefoot, or as near to barefoot as you can handle, there are also potential
risks. Some experts
say that wearing shoes causes the small muscles in our feet to weaken and the
tendons, ligaments and arches to stop doing their job. They believe that extra
cushioning and inserts in shoes result in poor foot biomechanics and increased
risk of foot, leg and knee injuries. Other experts argue that the right shoes will
correct biomechanical problems and actually reduce injuries. So there are compelling
arguments for both sides of the debate to go shoeless, or wear as little shoe
as possible.

?
Stronger feet: You will strengthen the
muscles, tendons and ligaments of the foot.

?
Reduced injury risk: Removing the heel lift
of most shoes helps the Achilles tendon and calf muscle lengthen, which may reduce injuries such as calf pulls
or Achillies tendonitis.

?
Forefoot striking: You learn to land on the forefoot rather
then the heel, allowing your arches to act as natural shock absorbers. (Heel
striking only came about because of the excessive padding of running shoes, and
research shows that landing on the heel is essentially putting on the breaks
every step.)

?
Improved balance: Without shoes, you
activate the smaller muscles in your feet, ankles, legs and hips that are
responsible for better balance and coordination.

?
More grounded: You’ll learn to spread
your toes and expand your foot, making it a more solid base to support your
movements.

?
Injury risk #1: Your muscles will initially
feel overworked, which could lead to Achilles tendinitis or calf strains when
the typical heel lift is removed from the shoes.

?
Injury risk #2: The bottom of the feet (plantar
surface) for most people is soft and tender. Going without a stiff-soled shoe
may initially cause plantar pain, or worse, full-blown plantar fasciitis, as
well pain around the metatarsal bones of the toes.

?
Blisters: You may battle blisters
until calluses are formed.

Recently, a
number of studies have emerged showing an increase in the number of lower leg
injuries suffered by runners who have transitioned to barefoot running or minimalist
shoes, but that is not to say that barefoot running is necessarily bad for us,
as explained by Doctor Ross Tucker of the South African Sports Science
Institute.

“In my opinion,
I’d say that every single runner will benefit from barefoot running as a
training method. It changes muscle activation patterns, strengthens muscles and
tendons that we don’t activate nearly as well in shoes, may be an effective
form of rehabilitation, and it’s really enjoyable. So I would say that everyone
should incorporate some barefoot running into their training programme, whether
it’s a two-minute warm-up, an easy 30-minute jog once a week, or some sprints
after training. I’d say try it out and feel the difference it makes.”

“However, practically,
theoretically, logistically and for many other reasons, some people will not
take to barefoot running well enough for them to become 100% barefoot runners. It
may prove to be the answer to some people’s prayers, and the secret to
injury-free running for life, but can’t be used in the same dosages by everyone
else, as they may have an entirely different history and thus set of contra-indications.”

So
the bottom line here, if you’ll excuse the pun, is that you should not simply
throw away your conventional running shoes immediately. Transition slowly into
minimalist shoes, and then to barefoot running, and let your body acclimatise
to the change. That way you will reap the benefits of barefoot running with far
less risk of injury. And you will find out the easy way if it works for you or
not.