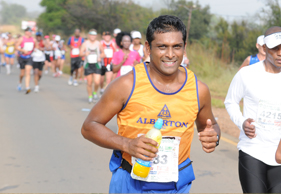 As a boy,
Ed would wake up early to watch the Comrades, not knowing that years later,
he’d be training for his first Comrades in 2012. Ed, Group Communications Executive for Murray and Roberts, has two passions
in life: His job and road running. “Comrades is part of South Africa’s
DNA! Last year I seconded a friend and
the spirit was unbelievable.”

Ed was bitten by the running bug two years ago and was encouraged by
friend Morn? Reinders to do longer distances. “He’s got eight Comrades behind
him, so he also gives me advice!”

Ed lies awake thinking about Comrades, puts in 60km of training a week
with long weekend runs and his preparation for the big day is all on track. By Comrades, he would have completed
five marathons and three ultras, and run a total mileage close to 1 200km since
January. “I’m ready. Comrades is going to be amazing – it’s something someone
can put on their CV.”

At 93kg,
Shaun decided to make a drastic change in his life. Having dealt with a
divorce, arthritis and rehab, he decided to transform himself. “I’m 20kg
lighter and I have dedicated myself to run as much as I can.”

Shaun has
challenged himself to 12 marathons in 12 weeks in 2012 as well as the 1 000km
challenge for The Wildlands Conservation Trust and the Wetnose Animal Rescue
Centre.

He was a
volunteer at Comrades last year, handing out water to passing runners. “I fell
in love and knew I needed to do it!” If Shaun’s 12 in 12 challenge goes to plan,
Comrades would be his 12th race and he is eager to cross the finish as
he always does – with several cartwheels!

Shaun runs in
the mornings, attends time trials at Alberton Athletics Club, and does his long
runs on weekends. For inspiration, he has placed Comrades logo stickers on his
laptop, his office desk and on a mirror at home. “Comrades is not a
destination, it’s a journey for me, and it’s just the start. Maybe I’ve got
rocks for brains, but this is what I drive to do.”

At the
beginning of 2011, Claire never even thought she’d finish a 10km race, but now
she is ready to tackle her first Comrades. She runs for the Fish Hoek Athletics
Club and was inspired by her Comrades clubmates. “They encouraged me to try
Comrades. I did my first 21km last year. I also ran the Peninsula Marathon and
often do 50km training runs.” She works for the Cansa Association, is busy
studying for her Masters in Educational Planning at UCT, and still manages to
fit in training.

Claire says
she is getting excited for the Big C and cannot wait to experience the
atmosphere on race day. “I don’t want to get too stressed because I’m there to have
a laugh and fun. If I don’t worry, I’ll do my best!”