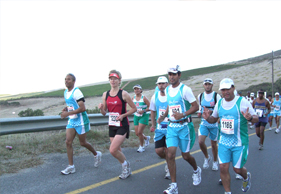 A
common sight in many road races in the Cape is a big bus of Top Form runners
having a good chat and sometimes even singing. “It’s just the natural way our
members gel and we like sticking together,” says chairman Anver Yasin. “We even
have music and singing, because our bus always has a driver, usually our
vice-chairman Magedie Theunissen, who carries a little music box in races and
club runs. I think running was traditionally a quiet sport until Top Form came
along!”

The club was established in 1993 and today has about
150 members. It is based out of the Turfhall sports grounds in Athlone, where
it hopes to get its own clubhouse soon. Top Form boasts a number of talented
runners, including Martha Pretorius and Shaheed Russon, who recently finished
second in the mixed veteran category at the three-day Pronutro AfricanX Trail
Run. “Martha is the Forrest Gump of this club, because she can beat all the men
in six-day events and knows no limits, just keeps running,” says Men’s Club
Captain Paul Cieverts.

There
are also some real characters in the club, like Mohamed ‘Bapoo’ Osman, better
known as the Bow-wow Man. “Bapoo just says bow-wow all the time when he runs –
it comes out involuntarily, and people actually look for him and know him for
that. I was once on a hike in the Fish River Canyon in Namibia, and a guy from
Gauteng asked me if we have a guy in our club that keeps saying bow-wow!” says
Anver. Another stand-out character is Petrus Campher, who often sacrifices his
own run to help others, by sticking with struggling runners despite the cut-off
approaching, or going up a tough hill over and over again to help tired runners
get to the top. “He’s such a brilliant, unselfish guy, with so much
enthusiasm,” says Paul.

ON THE SOCIAL SIDE

Top
Form holds pasta parties before the Two Oceans and Comrades, as well as
quarterly socials and the Annual Awards in February. “In January we all go away
to the Berg River Resort in Paarl for a three-day training camp, and the club
gazebo is taken to all league races and the bigger vents, with eats and drinks
usually supplied as well,” says Paul. Another highlight on the calendar is the
end-of-year Charity Run, to raise funds for and collect gifts for three old age
homes in the area, and the members run to Ethel’s Place in Silvertown to hand
over some of these gifts.

The
club also has a development squad of junior track athletes, training with
Sharief Jeffreys, while minister and motivational speaker Chris Osborn and his
wife Hilary organise buses to bring 20 to 30 kids from outlying areas to the
cross-country league races, with the club picking up the tab for the bus fares
and entry fees. “The club is also involved in raising funds for a feeding
scheme that Chris runs to help these kids in poorer areas,” says Anver.

The members meet up on Tuesdays at nearby Vygieskraal
Stadium for a track session and again on Thursdays at Rhodes Memorial for a
hill session, then on weekends they do regular long runs, especially in the
high season leading up to the big ultras. It was on one of these pre-Comrades
long runs six years back, on Mothers Day, that one of the club’s funniest
moments occurred, as Paul explains: “We did a 64km run from my home in
Crawford, including the full Two Oceans route. It was really hot and we had
three cars seconding us, so after Constantia Nek some guys decided to bail and
they filled the cars.”

“About 10 of us kept going, but when we got to Top
Gate, about 13km from home, Jerome Mentor decided to stop and told us to send a
car back for him when we finished. It was so hot that I actually left my watch
at a caf? just to get a cooldrink, and by the time I got home I was totally
finished. That evening I got a call from Jerome’s wife, Claudine, to ask where
he was… He was still sitting next to the road, and he was so knackered, he
didn’t even moan when we eventually fetched him! Luckily Claudine is also a
runner, so she understood why he had missed the whole of Mothers Day.”