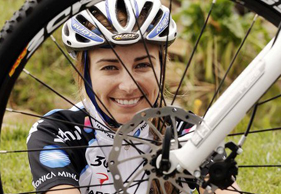 To say that Yolandi was nervous after hearing that she would
be participating in the Absa Cape Epic would be an understatement. She never
imagined that she would be faced with such an arduous challenge, cycling 781km
with 16 300m of climbing in eight days, with such short notice, says Yolandi.
“The Epic is a very hard race. You have to be able to comfortably ride 12 to 15
hours a week before taking on an event like the Epic, or any mountain bike
event lasting longer than three days.”

Luckily, Yolandi is an old hand at mountain bike races and
has acquired many titles over the years. She is a former winner of the Momentum
94.7 Cycle Challenge and has won renowned races such as the women’s category of
Joberg2C, the Nissan Diamond Rush Race, The Marrick four-day MTB Challenge and
the Crater Cruise held in Parys. Still, the Epic was a step up, she says: “I
think the difference between the Epic and other mountain bike races is the fact
that you push or carry your bike a lot and they take you over really rough
terrain, so there is a huge mental aspect to the Epic which you have to prepare
yourself for.”

THE START OF GREATER THINGS

The start to Yolandi’s remarkable
cycling career was influenced by her father who was eager to take part in the Cape
Argus Pick n Pay Cycle Tour. “My Dad was the first one in the family to take up
cycling. He heard of the famous ‘Argus’ and dragged my mom along on training
rides, but he soon got too strong for her. She needed a new training partner
and asked me to join her on a ride one day. I can’t remember much about that
specific day, only that I was 12 years old and that I enjoyed it so much that I
went out the following day, and the following day, and since then I have never
looked back!”

Yolandi believes that cross-training,
including some running, was crucial to her recent Epic success, as it reduces
the risk of injury and improves muscles balance. It also strengthens the
muscles, both those used on and off the bike. She believes that running can
play a big part in a cyclist’s performance. “Running is a weight-bearing sport
while cycling is not. Therefore. I believe riders, especially women, can
benefit from running, as it can help prevent osteoporosis and help in the times
when you are off the bike.” Besides cycling, Yolandi trains in the gym three
times a week and these sessions include running on the treadmill.

The Absa Cape Epic was a good
training block for Yolandi, because she is preparing for the gruelling climbs
of the TransAlp Challenge in July. The route courses
through some of the most beautiful mountains in Germany, Austria, Switzerland
and Italy. “I believe I
have enough endurance on my legs now, and therefore will focus more on
intensity.”

As for the future, there are still
many mountain bike races ahead, but Yolandi says that once she is finished with
her cycling career, she would be very interested in taking on some off-road
running as well as competing in the ever more popular XTERRA off-road triathlon
races. But until then, this epic rider has many more tough hills to climb on
her bike!