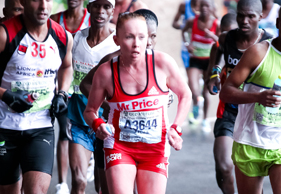 Triple
Comrades champion Stephen Muzhingi of Zimbabwe became only the second male
runner to hold both the Comrades and Two Oceans ultra-marathon titles at the
same time, thus equalling the record held by Derek Preiss since 1974, and only
the third male runner ever to win both races. Derek won both the ultras in 1974
and again in 1975, and if Stephen can retain his Comrades title in June, he
will also match Derek’s feat of winning both races in the same calendar year.
The only other runner to have won both is Fusi Nhlapo, who won the Two Oceans
in 1998 and the Comrades in 2003.

Having
stayed with the leaders most of the race, Stephen took the lead at 52km, then
accelerated up ‘Chet’s Hill’ on Union Drive, the last big climb of the race.
There was a moment of drama when he slipped and fell in the mud as he turned
into the home straight, but after a quick glance backwards, he picked himself
up and finished strongly, clocking a new PB of 3:08:08, the 10th fastest
time ever for the race.

Before
the race, Stephen said, “I want to improve on my 3:09 of last year. Everyone
wants to win the race, but I look to improve each year. And if the other
runners let me win, then that’s fine.” He sure lived up to those words, but after
the race, he made light of his win and equalling Derek’s record: “This is all
part of my preparation and build-up for the Comrades. I was going for a good
time, and I knew that it was good enough for the win. The conditions suited me.
I think I do better in difficult conditions, and I felt strong towards the
finish.”

Possibly
the best performance of the day saw SA marathon record-holder Gert Thys (40) smash
the world best for 50km in the veteran (40-49) category, clocking 2:48:39 at
the intermediate timing mat as he went on to finish fourth in 3:09:42 and also
break the veteran course record by almost four minutes. Both these records were
held by Vladimir Kotov and were set 12 years ago.

After the
race, he mentioned his career-long insulin difficulties and complained that his
second could not get onto the course to test his blood sugar levels at three
points during the race. “I am certain I would have won if I had been able to
correct this at 47km. At the finish my sugar level was much too low. I know a record is possible on this
course, but the weather conditions were against us.”

He then
predicted another record in the near future: “I congratulate Stephen on his
win, but I will be back to race him in Comrades. I am going for the record – it is
soft and little more than a jog. I will be the first person to run the Comrades
in under 5 hours!” (The current Comrades record is 5:20:41, so this year’s
elite race should be enthralling to watch!)

Elena
Nurgalieva of Russia
became only the second athlete ever to win four Two Oceans titles as she won
the women’s race in 3:41:55. The only other runner to have achieved this feat
is Monica Dr?gem?ller, who won in 1988 and 1990-92. Elena had been tied on
three wins with her twin sister Olesya as well as Bev Malan and Angelina
Sephooa. Olesya did not run this year due to injury.

When asked
if she had been going for the fourth win and Monica’s record, Elena said
winning was her focus, not records. “Yes, I know this legend woman and this
year read more information about her in magazines, but for me it was more
important to be the winner this year than count how many times I won Two Oceans
or Comrades in the past. The rain and wind didn’t help us in the race, but all the
runners were in the same conditions, and everybody struggled. To tell the
truth, for me the temperature was very comfortable, not hot and not cold. I
liked it!”

Another Russian, Natalia Volgina, claimed second position, having won
the race in 2002 but not run it since 2003. She led much of the race with
Elena, but eventually slipped back going up Constantia Nek. It did appear they
were working together at times, but Elena refutes this. “I saw her only on the start line and
so we hadn’t any agreements before the race. Just we passed drinks to each
other during the race because we are friends in normal life, but not on the
road. Here it is business! But it is always a help to have company and someone
to talk to, so I want to thank Natalia.”

With an extended 16 000 entries this
year, the Old Mutual Two Oceans Half Marathon made an even stronger claim on
the title of biggest 21km in the country. Granted, the weather probably
prompted a number of runners to stay in bed, but over 12 500 made it across the
finish line within the three-hour cut-off. South African men and women
dominated the top 10 positions in the half marathon, with Xolisa Tyali winning the
men’s race and Rene Kalmer crossing the line first amongst the women.

Due to the larger field, the organisers had changed the first half of
the course, in order to clear the ultra route quicker ahead of the 56km
starting 25 minutes after the 21km, and times were expected to be slower
overall due to the inclusion of a big climb in the first three kays. However,
while the winning times were slower than previous years, no fewer than six
fastest times for the year in SA were run in various age categories, including
both the men’s and women’s open categories, so it remains one of the faster
courses in the country. And with the rain only beginning about 90 minutes after the start,
most of the top runners only had wind to contend with.