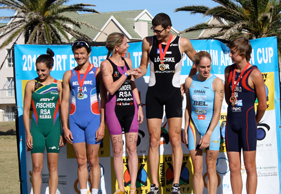 It was a star-studded elite men and women field that lined up, aiming
for important ITU points in an Olympic year, and of course also the title of
South African Champion. With warm conditions and a typically strong wind, the
stage was set for a challenging race.

Among the big South African names were Richard Murray, Erhard Wolfaardt
and Hendrik de Villiers, all three with their sights set on the two spots for
triathletes in the South African team going to the Olympics in London later
this year. The women’s race saw Kate Roberts, who has three African Triathlon
World Cup titles to her name, and Andrea Steyn, the undefeated BSG Energade Tri
Series champion, lining up. The strong presence of international competitors
from Germany, Poland, China, Finland, Belgium, Morocco and France meant the
locals had their work cut out for them.

THE RACE IS
ON

The men were first to head out on their 1.5km swim, braving big breakers
to get behind the waves. Young Henri Schoeman led the men out the water,
followed by Frenchman Frederic Belaubre. They left transition turning into a
strong headwind for the first of four laps of 10km on the bike. The chasing
group of German Franz Loeschke, South Africans Wicus Weber and Wian Sullwald,
and the Moroccan Mehdi Essadiq, all worked hard for the first 5km to catch up
with the leaders. The lead group then remained the same for the rest of the bike
leg, steadily pulling away from the chasing groups.

The race was well supported and there was a great atmosphere as the
excitement mounted during the run. Loeschke took the lead in the run and the
rest of the field simply could not catch him. He won the race in a time of
1:57:26, followed by Belaubre some 30 seconds behind him. The first South
African to cross the line, and claim the South African title, was 18-year-old
Wian Sullwald in third place, doing extremely well in his first Olympic distance
race. “I really would like to get a podium at Junior World Champs. It will be
quite tough, but fortunately there is still some time to train for this,’ said
Sullwald after the race.

In the women’s race, Mari Rabie was first out the water with Kate
Roberts in second position. They worked together on the bike course, hoping to
open a gap between themselves and the chasing group, but after one lap they
were caught by the chasing group consisting of South Africans Carlyn Fischer,
Vicky van der Merwe, Gillian Sanders, Corinne Berg and Andrea Steyn.

All African Games Champion Carlyn Fischer entered transition first and
quickly led the rest of the field out onto the run course of four laps of 2.5km.
She was followed by Belgian Katrien Verstuyft, Kate and Gillian. With about 1km
to go, Sanders laid down the gauntlet and pulled away from the group. She held
onto her lead to win the race in a time of 2:12:08, followed by Fischer in
second place and Verstuyft in third.

“There were two titles up for grabs today, so that made it extra tough,
and with the foreign girls racing it made it more exciting,” said Sanders. “I’m
still in my winter training, and I didn’t taper for the race, so I am very
pleased with the result. I stopped my law job a year ago to train for the
Olympics and try to get into the squad. I have some races coming up and will
know by the beginning of June if I made the team.”

The ITU Triathlon Premium African Cup was superbly organised with great
racing and nail-biting finishes, living up to its reputation as one of the best
races on the calendar.