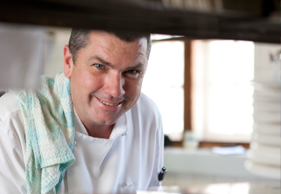 He is currently running two popular Boland
restaurants, has done a bit of TV work, and has cooked for celebrities such as Trevor
Manuel and Tokyo Sexwale, former British Prime Minister Maggie Thatcher, author
Jackie Collins, actors Beau Bridges and Wynona Ryder, and Bono of the band U2,
but Matthew Gordon is also an avid mountain biker, in between time with the family
and pursuing other interests.

Born in London, Matt (45)
grew up in Johannesburg and completed a two-year chef’s course at Wits Tech
Hotel School. “As a kid I did a lot of cooking at home, and it evolved from
there.” An overseas stint followed before Matt returned to SA. He first had to
do two years of national service, but his training was put to good use as head
of the army’s functions kitchen in Pretoria.

After a few years working at
the Sandton Sun, then moving to the Mount Nelson in Cape Town, Matt went solo
in the early 90s and opened his first restaurant, Le Ballon Rouge, in Franschhoek. That led to an offer from Haute
Cabriere wine estate to run their restaurant, and he also opened the French Connection Bistro in Franschhoek
in 2002, which he still owns. Then came the opportunity at Harvest at Laborie in Paarl, on the Laborie wine farm.

“The restaurant had
basically gone out of business, but owners KWV decided last September to get it
going again, so they called me in. We refurbished the place and made it a
kiddie-friendly family restaurant, and it’s such a lovely farm setting, just
2.5km from the centre of town and thus easily accessible. The farm also offers
mountain biking or trail running routes, and adjoins Paarl Rock Nature Reserve,
so we’ve held adventure races and orienteering events here.”

Matt raced motocross bikes
when he was younger, and then got into mountain biking eight years ago to keep
fit. “It’s the ideal sport for me, living in Franschhoek, near the Berg River
Dam, with vineyards, forests and mountains right on my doorstep” Matt is
married to Nicky and they have two daughters, Emma (12) and Katie (8), and the
whole family is regularly out mountain biking.

FITTING IT ALL IN

So with two restaurants to
run, and a family, how does Matt find time for exercise? “I’ve got staff that
have been with me for a long time, and it makes my life so much easier having a
capable crew behind me. I can usually go riding five times a week, with two
spinning sessions and three rides on the mountain.”

Matt also finds time for his
other passions: Flying, techno gadgets and playing the drums. “I redesigned
Haute Cabriere with a helipad on the roof, so got to know the pilots and got
plenty of unofficial training. I got my helo licence in 1998 and fixed wing
licence in 2004.”

Matt says he will possibly
do a recipe book in the near future, and would also like to do more TV work. “I
would like to tie in my flying and cooking, by flying to interesting places to
go cook with people. There aren’t that many flying chefs around, so I think it
would be an interesting show.”

Matt
says: “Blend everything together in a blender until the ice is
crushed, and this recipe should make five servings. It really gives you a bit of grunt, so you
can drink it before a training session or race.”