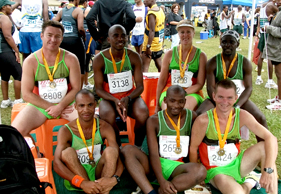 When you’re
exhausted in a run, you need something – anything – to give you a boost and
keep you going to the finish line. South Coast Striders running captain Wayne Wridgway knows this feeling all too
well, so he came up with the idea of neon laces at a club time trial. Wayne told
his fellow Striders members that when you feel exhausted during a run or race,
you just have a quick look down at your shoes and the shocking colours will
spark the energy levels back to your body. Since then, members have followed
his example and worn the unusual laces in training and races.

In 1997,
club founder and avid runner Brian Gibson-Taylor formed South Coast Striders and
14 interested runners joined. Brian, who had been part of Savages Running Club
in KZN before the creation of the new club, was determined for the club to
succeed. He played vice-chairperson and made Bill Chevell, a track athlete who
represented South Africa at the 1952 Helsinki Games, chairperson.

From then
on, Striders has blossomed into one of the best loved running clubs,
encouraging members to always keep running. Brian brought enthusiasm to the
club and focused on long training runs, as he was a Comrades enthusiast
himself. Sadly, Brian passed away in 1989, a great loss for the club. However, his
enthusiasm lives on through the club.

Striders is
known as a club for every type of runner, including those who are looking to
get a little active and socialise. The club believes that’s what running is all
about, in the end. But for those more serious about running and who want to
improve their running times, there is a time trial every Wednesday just after
5pm at the clubhouse in Edward Street in Uvongo.

While
members remain enthusiastic, the club’s location on the lower South Coast does
at times affect participation in races further north. “Durban and Midlands
races are clipping our wings to participate in all the weekend races, but we
are well represented in the bigger well-known events,” says club secretary
Hendriette Ludick. When the club runners do participate in the bigger races,
they have to leave around two in the morning to get there before the 5am
starting time. After a race, members and their supporters socialise at the
club’s tent, before the two-hour drive back home. For those members who missed
out there’s always a plan B. “Every runner who misses out will go on a long run
every Saturday or Sunday from the clubhouse. Not every member can travel to the
races we attend up north,” says Hendriette.

The club’s
annual half marathon, The Powerade Sardine Half Marathon, takes place in July and
stamps the club’s influence in the South Coast area as over 1 000 runners take
up the challenge. The event marks the time of year when millions of sardines
wash up on the South Coast. So, while nature permits the sardine run, Striders
run the Sardine themselves. The club also organises warm drinks and blankets
after the race to fight off the winter sting. A 10km run is also held on the
day.

The club is
also looking to organise a 10km event in August this year. And if you prefer to
walk, Striders also gives walkers the opportunity to get their heart rate up.
The walking group holds an annual walk from Margate Wimpy to the Old Pond in Port
Edward, a distance of 34km. As motivation to get the walkers to the finish, the
club’s runners support them in travelling vehicles on the route.

Before
Comrades crunch-time, the club organises a long distance training run of 60km
called Port to Port. Starting in Port Shepstone, runners go along the back
roads in town and out past banana and sugar farms, continuing to the main beach
area in Port Edward, a fantastic route for those endurance enthusiasts looking
to get a foretaste of the gruelling distance of Comrades. Being at the coast, this
long training run has its perks: “Needless to say, all the runners end up in
the cool waves of the ocean for their tired and sore legs,” says Hendriette.

That’s just
one example of the club’s great spirit and camaraderie. Building on a rich
history and foundation, the club provides a great space to socialise. It’s a
club for road runners, speed walkers, cross-country enthusiasts and track and
field athletes, as well as the more social runners and walkers. And of course,
the members of Striders, with their trademark shoelaces, are the runners that
stand out.