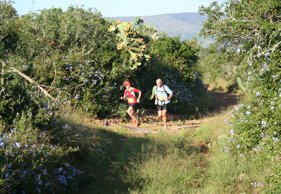 I have to
say that I really enjoyed this year’s Addo. It was my fifth: Two 100-milers and
now three 50-milers, as we old-schoolers still like to call them, despite the
distances varying a bit. I just have to keep coming back to this wonderful
race. A lot of folk run an event once, tick it off and move on. Somehow that
tends not to happen at Addo – at the start, year after year, it’s the same old
faces in among the new ones.

With Addo,
the distance isn’t that important, it’s the journey. A first look at the
profile demands a second one. There are two very tough climbs, but for the most
part this is an enjoyable, varied though extremely challenging route. Though
tough, this race is a pleasure to run – everything is sorted for you by Nadia
and Estienne Arndt and their team. Registration the day before is easy and the
route is clearly marked. The checkpoints on this race are very special, as are
the people you will find there. Be prepared: Despite having lost your freshness
many kilometers back, they will love you unconditionally. As you approach, you
are hailed as champion, and treated like one until you leave. Everything you
need is laid out like a kid’s party.

Medical
backup is on hand – I, for example, was spotted along the road to Addo bidding
what I had hoped was a private if protracted farewell to my recently-gulped
chocolate milk. Within a few minutes the nurse came cruising by to ask if I
needed help. Now that’s backup.

And
everyone who finishes this race, at Zuurberg or at Addo, is a hero. The winners
have trained like demons and nailed that trail to claim their place on the
podium, but nobody who completes the course has had an easy day, and everyone
who does is rewarded.

A DAY TO REMEMBER

So what
made this year’s race special for me? Certainly not my time, at just under 13
hours my slowest yet for the distance. No, it was the coming together of many
of the things that epitomise trail running that made it a golden day. For me it
was the companionship I found along the way. I relish running alone, and I had
plenty of time for that, but enjoying the early part of the trail with a dear
friend, greeting familiar faces at checkpoints, and making a new friend as the
kilometres passed by, added to the richness of my Addo experience. A hug from
my fianc? at Zuurberg and help from a team-mate on the last gruelling section
to Addo were highpoints.

Addo had
texture, it had flavour, it had scents and sounds and spirit and feeling, it
had warmth and vigour, it had effort, pain, joy and freedom, and this is what
running on trails in wild places does for many of us. If we train hard, keep
our focus and are lucky on the day, we have all this and a shot at the podium. We are still exceptionally fortunate if,
back in the pack, we rediscover that the real world is to be found in places
and on races like these, and in the voices and hearts of our friends. T-Shirts
and goodie bags and medals and all those other things are great, but it’s the
physical, mental and spiritual engagement with the environment that is the
essence of trail running for me.