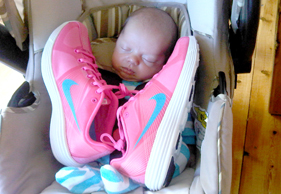 I remember clearly being totally shocked when I stared
at the pregnancy test that had two stripes on it. Not because I didn’t think
that I could fall pregnant, but because I had just arrived back from running my
eighth Comrades Marathon. I had trained very hard for this one. After finishing
11th three times, I was not going to finish eleventh again, so I
finally got some coaching help from Alec Riddle and it was all falling into place
as I ran a 10km PB two weeks prior.

So when I was tripped at the start of Comrades
by a runner turning back to pick up his sunglasses, I was devastated. I tried
to get up several times, but each time I got stampeded. Thankfully my brave
husband Michael turned back and grabbed me by my arm, pulling me to the side. My
knee was stuffed, my hip bruised, my hands grazed and my confidence shaky, but
I battled on and finished. I vowed that I would put my fitness into something
else, to make all the training, early mornings and sacrifices worth the while.

So there I was, staring at the pregnancy test,
and my first thought was that it probably was a blessing in disguise that I
took a tumble at the start of Comrades. My second thought was, I wonder how
long I can still run? My elation was short-lived as I Googled running and
pregnancy. After only finding a few scrappy bits of information on elite
athlete Paula Radcliffe, I was forced to broaden the search to include any form
of exercise. Even though it was wonderful to read that Paula Radcliffe ran
throughout her pregnancy, a normal working pleb like me didn’t have the privilege
of four-hour afternoon naps, massages and nutritious meals being prepared for
me. In the real world there are work stress, deadlines and family commitments.

I was amazed that in today’s information-overloaded
society, there are just scanty bits of info on something as popular as running,
and as prevalent as pregnancy. So I used my medical background to do a bit of
research and found that the only real enemy in pregnancy is core temperature,
and the biggest risk is during the first few weeks when most women don’t even
know that they’re pregnant. So with my newfound knowledge I went to the gynaecologist
to discover I was nine weeks pregnant. When I asked him about running during
pregnancy, he simply said listen to your body. He added that as long as I’m not
racing and chasing mega miles, running doesn’t pose any risk to the foetus.

I soon found that running was not the enemy, but
that heat, hills and hormones were, especially the ones that shrink your bladder
to the size of a pea. I ran early mornings, limited my runs to an hour and kept
my running speed down to a minute per kilometre slower than usual. So it may sound
impressive that I still did a 5km time trial in 24:34 the night before I went
into labour, it is all relative, since a few months earlier I was easily running
sub-4min/km.

I think running helped with morning sickness,
and the only days I felt slightly queasy were the days I didn’t run. It
definitely helped with the tiredness, as I had a second burst of energy the
nights I went out for a little jog. Backache and constipation, the two ugly
sisters of pregnancy, were definitely alleviated by being active, so all in all
it really lifts your spirits and helps to keep your mood elevated and in a
positive frame of mind – which is a good thing for baby. I also believe being
active helps you to eat healthily, as you don’t want to feed your body rubbish
when you are training, and being used to eating that way, I hardly had to
adjust my diet during my nine-month stint.

I read an article by Michelle Pieters (editor of
Modern Athlete) on running and
pregnancy, which was so nice in that it gave me some backup that I wasn’t
endangering my bubba, as a few frowning faces suggested during some club runs! In
fact, I was increasing blood supply to the placenta, thus increasing nutrients
and oxygen to ensure optimal growth. I can’t even remember how many times I got
asked till when I was allowed to run. My answer was always the same: Until it
feels uncomfortable – and luckily that never happened! I tried swimming a few
times, but I missed the running camaraderie too much, and just felt like I
didn’t really do a workout if there was no sweat involved!

COMRADES VS IRONMAN VS BIRTH

Now
the question I get asked most these days is what is more difficult, Comrades,
Ironman or giving birth? Well, they are all different, Comrades being hardest
on the body, while Ironman is mentally tough, but birth for me was just bliss –
maybe because out of the three, the birthing process took the quickest and had
the best prize at the end!

I
woke up just before 5am and soon realised that this could be the start of D-day.
My biggest fear was that I was going to arrive at hospital, this
Comrade/Ironman athlete, only to be told that labour had hardly started and I
need to go back home and maybe come back in a few hours. So, after walking the
dogs, buying bread and taking a leisurely shower, I finally phoned hubby at 9am
to say he better get his butt back home (it’s a 40-minute drive from Uitenhage
to PE).

We
arrived at the hospital at 10:30 and I sill posed for a photo at the entrance,
not knowing that I was already 8cm dilated! When the sister did the internal, her
eyes widened in surprise. She kept asking if I wanted any gas at least, but I
kept waiting for things to get unbearable, which fortunately never happened. With
hubby diligently rubbing my back, I breathed through it all, and baby Ryan was
born at 12:15, weighing 3.1kg.

GETTING BACK INTO SHAPE

It
is such a privilege to have a happy, healthy and content little baby. In fact,
he even went for his first seconding outing the week after he was born. Being a
protective dad, Michael said we’re only allowed to join him on route after sunrise,
so we caught up at the 20km mark. We’re also planning to wait for Dad at the
finish line of Comrades.

I think the most challenging part of this journey is
going to be getting back into serious running after giving birth. The Doctor’s
orders were once again, listen to your body. Since the birth was uncomplicated
and relatively easy and fast, after three weeks of walking our two Scotties, I decided
to do an easy 4km jog. I am happy I erred on the side of caution, since prolapsed
bladders and other complications can rear their ugly head only later in life. Now
that baby is old enough to accompany me to the gym, I can supplement running
with the elliptical trainer. My goal is to maybe do the Knysna Marathon just as
a jog to get back, and then build up to attempting a sub-3hr marathon towards
the end of the year.

But I do find that the motivation to get out the door
is much harder with a little nunu gargling, but I’m hoping that supporting
hubby at Comrades will light that fire to go back next year. I also just
received a luminous pair of pink Nike racers that I’ll keep by my bedside table
as a neon sign of hope that I can aspire to race again.

Whether it be a marathon or a 10km, every runner out
there has their personal goals in mind, and what pregnancy has taught me is
that it is such a privilege to run and be active, and I hope to still be
running one day when Ryan wants to go for gold at Comrades. In theory, we’ve
done one together already!

Davera
has a marathon PB of 2:48, has finished 10 Two Oceans Marathons with a best position
of eighth in 2010, has completed eight Comrades Marathons (PB 6:59, with three
11th positions) and has completed a couple of 70.3 Ironman events
(best result a fourth position). She has also completed four full Ironman
events (best position eighth), including one Kona Ironman finish in Hawaii.