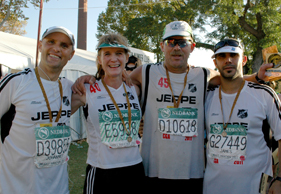 A run-of-the-mill
athlete all his life at school, JD Mostert started to take his running more
seriously after varsity, running several half marathons and participating in triathlons.
But then he wanted more. “There came a time when I thought there was a bigger
challenge out there – a way I could use running to give back,” he says. And
what better way than through his profession as a teacher?

JD, an
accounting teacher who heads Outdoor Education at St. Andrew’s High School for
Girls in Johannesburg, is extremely passionate about education, and through
running he is trying to make people aware of Ubambiswano, a charity headed by
St. Andrew’s since the 1990’s. The aim is to bring the privileged technologies
of private school education to learners from the Daveyton and Etwatwa areas in
Gauteng. “Education is the most important thing for me and there’s a gap in
South Africa,” says JD.

Funds
collected pay for the transportation of young learners from Ubambiswano to the Saturday School at St.
Andrew’s, as well as a packed breakfast and lunch as well as learning materials
for the facilitated classes. St. Andrew’s also heads a ‘Learn to Swim’
programme which teaches the basics of swimming and water safety. “Sometimes I
can’t be at the Saturday School, so I try to let people know about this great
cause through my running.”

A MAN ON A MISSION

JD’s
mission started in 2010 when he took on Kilimanjaro and also ran Comrades for
the first time in 2011 to raise some funds for Ubambiswano. He climbed Kilimanjaro with a
group of 40 learners and family members from St. Andrew’s. Dealing with
altitude and endurance, JD and the group summited in late August on a full-moon
night. “Both Comrades and climbing Kili teach you how to prepare mentally and
physically,” says JD.

Now he and colleague
Gavin Esterhuizen will take on the London Marathon this month. Gavin, a newbie
runner, has trained hard and has recently completed his first 21km. “Gavin has
come on in leaps and bounds and become used to the distance. For me, I’m a
runner and athlete at heart,” says JD.

He is
excited about his London Marathon mission. “It’s something huge and the girls
keep asking me ‘Sir, are you ready?’ There’s quite a hype among the learners
and teachers now and they’re also starting to run.” He is also planning more
fundraisers this year. “There’s an 8km charity trail run/walk on 21 July which
will be a junior school lap fundraiser as well. It’s also a week before the 702
Walk the Talk, so people can get good training in!”

NO STOPPING HIM NOW

JD’s humble
character and love for being active has done wonders for learners from Ubambiswano. And he is still planning to tick
off more missions on his active Bucket List. “Running has got me now. I want to
do the Dusi, row at Fish River, complete multi-stage trail runs and run Two
Oceans and do Kili again! I can’t sit still, I have to keep exploring – and for
a good cause!” JD’s mission for education is quite simple: “Just DO something
and keep going –that’s my motto!”

For more
information go to www.standrews.co.za/ubambiswano