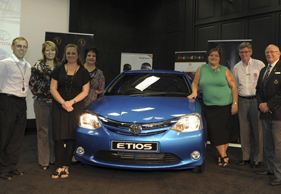 The
Comrades Marathon won the category of Sport Participation Event of the Year and
was up against such contenders as the Bidvest Unity Walk, Discovery 702 Walk
the Talk, JP Morgan Corporate Challenge, Momentum 94.7 Cycle Challenge and the
Old Mutual Two Oceans Marathon.

Champions of rhino
conservation recently put their money where their mouths are when four three-quarter
life-sized rhino, painted by South African celebrities, as well as exclusive
travel packages and fashionable watches were auctioned in aid of the Wildlands
Conservation Trust’s Rhino Conservation Project. The Wildlands Conservation
Trust is one of the official charities of the Comrades Marathon.

The Michelangelo Hotel Ballroom on Nelson Mandela Square played host to
the fundraiser, which was the culmination of Nelson Mandela Square’s Find and
Save the Rhino campaign – a joint initiative with the Wildlands Conservation
Trust. A magnificent R400 000, which included pledges by
generous guests in attendance, was raised. A further R210 000 was raised late
last year during the campaign, bringing the final tally of this initiative to
an impressive R610 000!

A total of 1 200 loaves of bread were
distributed by the Community Chest of Pietermaritzburg to welfare organisations
last month. The Community Chest manages and co-ordinates this programme and
ensures that the benefits filter down to the communities who need it. Electronics
company, Kay Makan, makes the bread available for distribution to the needy on
an annual basis. It is one way in which its owner says “thank you” to the
community for their ongoing support. Jonathan’s City Superspar is also a
partner in this community upliftment venture and makes the bread available at
cost.

CMA TEAM
IN THE MOTHER CITY

Running
enthusiasts can catch up with the Comrades team at the three-day Old Mutual Two
Oceans Marathon Expo from 4-6 April in Cape Town. The Two Oceans ultra is a
major qualifying race for the Comrades Marathon.

The
CMA will soon be launching its own travel service, Comrades Travel. Consultants
will contact Comrades runners directly to advise them of the best and cheapest
travel options to the Comrades Marathon.

The
CMA realises that every Comrades journey is a story worth telling, so please
e-mail your story to delaine@comrades.com.
Here is the story of Roshan Mohan.

I
have been a long distance runner for nearly 10 years and 2010 was my first
Comrades Marathon. Before that, though, on 14 March 2010, while running in
Malvern, I became the victim of a hit-and-run. The occupants of another vehicle
came to my rescue, and Lloyd and Lorraine Demmer rushed me to the Chatsmed
Garden Hospital.

X-rays
indicated that my right humerus was broken with some bones shattered due to the
impact. The next day I was wheeled into the operating theatre for a four-hour
operation. My right arm was dislocated and a titanium rod was inserted. Some of
the muscles from my arm had to be removed for the screws to set in, and I was
told that my humerus would take between six and 12 months to heal.

The
orthopaedic surgeon said that I would not be able to run Comrades due to the
nerve damage and the imbalance on the right side of my body, but upon being
discharged, I made the decision that I would run The Ultimate Human Race.
Without any physiotherapy, I was rehabilitated with the help of my wife. I
stopped all medication in order to be drug-free while running the Comrades.

My
first training sessions were an epic battle, but with my wife’s enduring
support, I prevailed. On 26 April, I took on the 52km Chatsworth Marathon and
finished in 6:17. Then on 30 May I conquered the race of all races. I struggled
after the halfway mark, but kept pushing on to finish in a time of 11:56.

My
2011 race was slightly better with a personal best of 10:18 and I look forward
to a great run this year. I remain grateful for all that I have and consider
myself a 2010 Comrades Miracle Runner.

Join
the Comrades family online and be the early bird that gets all the Comrades
Marathon news, as it happens: