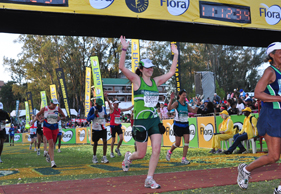 On air,
Koula is energetic, knows the local music scene and has become one of the
country’s most loved radio personalities. Off air, she has taken to running to
keep herself fit and happy. She is ready and motivated to be competing at
Comrades next month and will be using May to taper down from her long runs in
April. “When it comes to running, I just love to put on my shoes, run and have
fun. I wouldn’t call myself a fast runner, but when I run I can run far, and it
is one of the most rewarding experiences,” she says.

Koula was
encouraged to run Comrades six years ago by Kaya FM presenter Thabiso Sikwane,
who wanted to run for charity. Having no experience running long distances, Koula
was put on an eight-month programme to get Comrades-ready – a tough ask for
anyone! “We built it up, walking then running, and then competing in a 5km, 10km,
half marathon and so on. Before Comrades, Bruce Fordyce told Thabiso and I to
have beer and biltong before!” she laughs, recalling how she’d take any advice!

Koula’s
first Comrades was a down run and after her 11:35 finish, she vowed never to do
it again. “Then I thought I’ll have to do the uphill, and from then I was
hooked and kept doing it. Comrades is such a buzz, there is great support and it’s
a real leveller – everyone is equal on the day, everyone is there just to get
across the finish!” She adds that it’s easy to get inspired to keep going, even
though your body is tiring: “We pass a kids’ home and some are in wheelchairs
cheering you on, and there are also blind runners at Comrades. It gives me
goosebumps!”

FITTING IT ALL IN

Media guru
Koula has always been a fan of the music scene and decided to work in the radio
industry, studying journalism at the former RAU, spending time as a DJ at the
campus radio station and getting a job at Edgars Club Radio. She worked herself
up to 5fm and now holds a prime spot on 94.7 Highveld Stereo. In between gigs, freelance
work and appearances, she manages to keep up her training and relies on early
morning sessions. “I wake up at 4:30am and do short distances in the week, just
before work and meetings. My weekends are dedicated to long distances and
races.” Koula says early starts also allow her relaxing time in the evenings
with husband PJ Budler.

On top of
it all, Koula also has time to dedicate her love for running to a great cause by
being an ambassador for the Starfish Greathearts Foundation, a non-profit
organisation that raises funds and runs various development programmes for
orphaned and vulnerable children in South Africa. “I am proud to be a part of
Starfish because they uplift communities. There is an all-round team effort for
raising funds and they do a great job starting up feeding schemes for children
as well as teaching sustainable development, helping people help themselves.”

Koula is
running this year’s Comrades for the charity and is thankful for her position
to punt it on the airwaves, “I can luckily use it to motivate people to
contribute to a great cause. Running is very self-indulgent and takes up a lot
of your time, so I’m turning it around and giving back!”

Koula’s says
her lifestyle has changed drastically since getting into long distance running.
She has changed her diet, lost a lot of weight – which made her second Comrades
on the up route a little easier – and she sticks with a balanced protein and
carb diet… even though she admits she loves baking in her spare time. She bakes
cupcakes for friends’ parties and thinks it’s a great combo to be a runner and
foodie! She also runs races with PJ and likes to renovate homes.

“I want to
run a 100-miler in a few years. I am in love with Comrades, so I could carry on
longer with it, too! I’d also love to run New York, London, The Texas Marathon
and even the Arctic!” Meanwhile, for newbie runners wanting to tackle the Big C,
Koula has the following words of advice: “Start slow, build yourself up and wear
the right shoes! Don’t do too much, too soon, and join a club – you won’t be
left behind and will want to do more.”

Look out
for The Starfish Greathearts Comrades Campaign at www.facebook.com/starfishcharity
and sponsor a Greatheart runner!