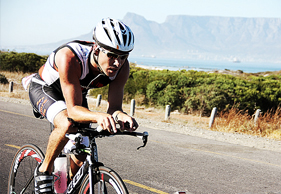 The thought of arriving for a
triathlon with sub-13-degree waters, insanely bumpy roads, a run route
resembling a courtyard maze and four different races on the same course, is a
daunting one to say the least! The cause of this anxiety was the 11Global, an
international Olympic distance triathlon hosted at Big Bay, Cape Town.

As if that wasn’t enough, to add a
little spice to our usual race day preparation, it was also our last outing for
the season as a complete team. Team Revolution Racing is a group of friends,
empowered through different sponsorships, who go out and race as hard as
possible while being the best brand ambassadors we can be. There are more races
this season, but not all the team members are able to participate, so we wanted
this to be our best collective showing.

The first race of the day was the
ITU Sprint Cup, which played host to the biggest field of international
triathletes in SA since 2008. Among the male superstars was national Ironman
hero Raynard Tissink as well as local star Richard Murray. In the women’s
field, another local, Vicky van der Merwe, was hoping to do us proud.

Hot racing was promised and hot
racing was given! A 750m swim was not enough to separate the contenders and
that meant that extra effort in the cycling was needed for the double 10km
out-and-back loop. This being a draft-legal race meant that no substantial gaps
were going to develop on this leg, so the outcome was going to be decided
during the 5km run.

Richard Murray clocked 2:40min/km
splits for the last 3km to tear the finish line tape and win his first race of
the season, with fellow South African Erhard Wolfaardt coming in third. Carlyn
Fischer made sure that our anthem was the only anthem to be played during the
medal ceremony with a stunning 14-second win in the women’s race!

While the pro’s were doing their
thing out on the course, we were getting ready for our race, the 11Global
Olympic Triathlon, which is double the distance of the ITU Sprint Cup. The
Atlantic Ocean always promises freezing temperatures, but this you can prepare
for. What you can’t prepare for are thick kelp forests, and the feeling of your
hand pulling through them!

All the energy I put into trying to
contain my nerves for the swim is most times unwarranted as it is usually over
before I know it. Also, for an ex-Durban boy like me, swimming at Big Bay
presents an opportunity to catch a wave in and overtake a few competitors. If I
had known as a youngster that an Orca wetsuit would have made catching waves so
much easier, I would have made sure that my parents spoilt me with one way back
then!

A short run up the beach, an
inevitable dizzy spell and a few sips of water later, we were onto the bike
leg. This consists of four out-and-back loops on the road connecting Big Bay
and Melkbos, arguably the bumpiest road in the Western Cape. For once, Mother
Nature was on our side and we were blessed with a gentle sea breeze.

As the run leg approached, the
temperature began to soar. My GU-enriched body would now have to endure two
laps of the shade-less holiday residential area, but I faded badly after a big
effort on the bike. A peak through the results shows that I was probably the
only athlete amongst my team and rivals to not endure it well, with great
results registered by all within the team!

Special mention has to go to our
captain, Wane Rossouw, who saved his best performance of the season for this
race, going on to podium in his age group! Another mention has to be made of a
close friend and bitter rival, Andrew Slot, who not only finished with a podium
for the second week in a row, but also made sure that if I am to have any hope
of beating him, I am going to have to enlist the help of a very expensive coach
as well as upgrade every piece of equipment I own. Still, I fear it may not be
enough! I hope Asics bring out running shoes with wheels soon!

The 11Global is a great race and
Table Mountain and Robben Island serve as magnificent backdrops. As for
Revolution Racing, we will be back in full force next year to claim a few more
XXL shirts on the podium!