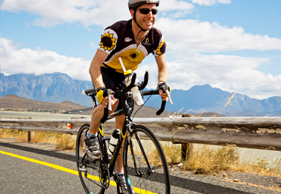 Growing up, I took part in
many sports enthusiastically, albeit some not always successfully, as my old
cricket coach would vouch for! I was never a runner at school… in fact, the
only running I recall was either on the football pitch or to the beach to check
out the surf. I quickly developed a love for the ocean and I found surfing was
a great way to express myself and escape problems at home.

My parents’ separation when
my brother Kristian and I were 9 and 13 respectively was devastating. It was
further compounded when Kristian fell ill whilst we were driving through to
visit family in Johannesburg. He was admitted to a hospital in Bloemfontein and
diagnosed with leukaemia a few days later. I didn’t understand how life-threatening
leukaemia was until I saw Kris in hospital connected to various drips and
machines with the colour drained from his frail-looking body. It was a life-changing
moment for me.

My Dad’s kombi was turned
into an impromptu ambulance and we rushed Kris overnight to the Red Cross
Children’s Hospital in Cape Town. He spent the next few weeks in the leukaemia
ward – many times in intensive care – and my memories of that time are
harrowing. Kris was one of the lucky ones and eventually made a full recovery,
even fulfilling his dream of becoming a father after being told that he would
never be able to have children. Today Kris lives with his fianc?e Kelly and their
two beautiful children Zach and Skye on the south coast of England.

FOR KRIS AND
MOM

After returning home to Cape
Town from a six-year work stint in London, I decided to take up running and
completed my first half marathon in 2006 in Knysna. I eventually moved on to my
first full marathon and then first Two Oceans ultra-marathon in 2009. I
dedicated both runs to Kris and my Mom, who had recently overcome breast cancer.
I got in contact with The Sunflower Fund at the time and my wife, Bianca, and I
registered as donors on the South African Bone Marrow Registry.

I then started thinking about
what more I could do for The Sunflower Fund and made plans for fundraising at
Two Oceans in 2010. Unfortunately, I had my first major running injury in late
2009. After some rehabilitation, I tried to qualify for Two Oceans but had
another breakdown and then took the difficult decision of taking time off to
fully recover.

The six long months of not
being able to run were hard, but made me more determined to come back a lot
stronger. I took up cycling and swimming and did my first sprint distance
triathlon as part of my comeback. I enjoyed it so much that I knew that one
sport would never be enough again!

My friend Jason Taylor and I
entered our first Argus Cycle Tour in 2011 and I decided to use it as a
platform to raise funds for The Sunflower Fund as part of their Miles 4 Marrow
Campaign. My fundraising went a lot better than my cycle did on the day (five
punctures!) but I enjoyed the experience and began thinking about what to do
next. I then completed my first ultra trail run and followed it up with an 80km
PUFfeR run, finishing in The Sunflower Fund kit. The incredible support I got
from people as I ran wearily along Signal Hill and then into the Waterfront
because I had The Sunflower Fund top on got me thinking about how I could use
sporting events to help increase visual awareness and exposure of this charity
to the public.

Since then I have
participated in the Totalsports Challenge, run a number of half marathons, and
more recently ran my first road marathon in three years, all in aid of and
wearing my beloved The Sunflower Fund kit.

MY BIGGESTE
CHALLENGE YET

This year I decided to take
on my biggest challenge yet for The Sunflower Fund by taking on The Spec-Savers
Ironman South Africa in Nelson Mandela Bay on 22 April. The event comprises a
3.8km swim, a 180km cycle and a 42.2km run, all to be completed in less than 17
hours in order to be called an Ironman.

Fitting in the training required
to complete this iconic event has been challenging but gratifying, as I am
doing it for a cause close to my heart. The show of support has been incredible
with New Balance, Coral Wetsuits and Dykes van Heerden Attorneys amongst others
that have donated or sponsored towards fundraising going into the event.

Inspiration is readily
available and often in places you don’t quite expect it unless you open your
eyes and your heart. It is easy to be inspired watching athletes competing in sporting
events like the Two Oceans, Comrades and Ironman, or the Olympics, achieving
feats seemingly impossible to many of us mere mortals. However, I draw my
inspiration from people like my brother Kris and more recently my friend
Lucille Swart, who is fighting leukaemia for a third time and to whom I am
dedicating my first Ironman. Whenever I have a tough moment in training or
experience pain when I am racing, I think of them and remember what they have
overcome, and that gives me the strength and resolve to carry on and finish.

Science and technology have
come a long way since the days when my brother was treated and becoming a bone
marrow donor is not as scary as one thinks. In South Africa, we are a nation rich
in diversity and culture, which also means that getting a donor match is not
always easy. It only takes two test tubes of blood to become a donor and then,
if chosen as a donor match (one in a 100 000 chance), the process is similar to
donating blood. A donor’s stem cells are harvested when blood passes through a
cell separator machine.

The Sunflower Fund’s message
is “Share a Little, Save a Life” and means exactly that. Consider becoming a
donor or help The Sunflower Fund by fundraising for them through their Miles 4
Marrow campaign. By sharing so little of yourself and becoming a donor, you may
give someone a chance at life that they never had before.

To donate, sponsor or follow Scott’s
Ironman Journey, go to www.scotttait.co.za
or join the Tri-ing for The Sunflower
Fund group on Facebook. For more information on The South African Bone
Marrow Registry, contact Chris Moir at The Sunflower Fund on 021 701 0661 or
chris@sunfowerfund.org.za.