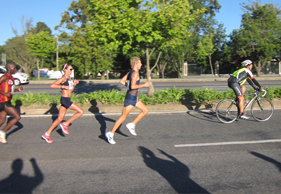 I
was not sure if I would be able to run the SA Marathon Champs after my knee
injury in October at the Amsterdam Marathon. I was out for four weeks and did
my rehabilitation at the High Performance Centre in Pretoria. I also did lots
of cross-training in the swimming pool, and only returned to the road in
December when I started proper road training.

With
SA’s always happening so early in the year, it results in Christmas time being
a fine balance between hard training and relaxation. Fortunately, my training
during December went very well as I had no major niggles or health setbacks.
Looking back, I think the rest after my setback in Amsterdam was a bonus. We
sometimes forget what a privilege it is to be healthy and injury-free.

As
SA’s was approaching, I realised that if I could run on a flat course I could
make the Olympic A-qualifying time of 2:37. I was positive and was looking
forward to my race. I wasn’t so concerned about the SA title – my main aim was
to clock a good time. I knew it would take hard work to run the time, but I had
set my mind to it.

I
was woken up at 2:50am as one my team mates decided to have a bath! I couldn’t
sleep again, so I decided to get myself ready for the big day. The race started
at 5:30 in York Street, George, and consisted of three laps of 14km. At the
starting line I reminded myself again that I had to work hard if I wanted to
run a time of 2:37. When the gun went off, I immediately shot to the front to
set the pace. I did not want to run a tactical race as in 2011. My first kilometre
was just under 3:38, a little bit too fast, as I knew I should run a steady
pace of 3:42.

My
husband said afterwards the moment he saw the undulations through the
Pacaltsdorp part of the course he knew that 2:37 was a tall order. It became
hard work to run 3:42 on the hills. On the second lap I realised that a
finishing time of 2:37 was not on. To make matters worse, we were directed to
the wrong side of the road which also increased the race distance. At the 18km
mark, I managed to break away from the bunch that was running behind me. Only
Mpho Mabuza could hang on, but after 20km I was leading by 180m. As the last
lap approached I decided to still run hard, but within myself, so that I could
defend my title.

I
crossed the finish line in 2:41:56, successfully defending my title. This was
an average of 3:48 to 3:49min/km on a course where we climbed 230m. I was happy
with my performance, but deep down I realised I could have run 3:42min/km if it
was a flat course.

I
feel blessed to be one of only three South African women to take thee SA
marathon titles, a statistic that I was not aware of before the race. I am
grateful to everyone who supported me on the day, my husband and manager, Carel,
as well as my coach and parents. Also, a big thanks to Athletics Gauteng North,
Mr Price and Nike. The biggest of them all is God, who gave me the strength to
be healthy and strong on the day!

My
Olympic dream is not over yet, and I still have until the end of April to
qualify. My plan is to run the Rotterdam Marathon on 15 April. If I don’t make
it, my husband and I will go to the Olympic Games to support the South African
team.

In the men’s race, Coolboy
Ngamole made a strong bid for the country’s Olympic Games squad by running his
second qualifying time as he won the SA Marathon Championships in a time of
2:13:18. Second place went to Michael Mazibuko (2:15:50) with Zolani Ntongana
in third (2:16:50). In the women’s race, Mpho Mabuza was second in 2:43:29 and
Gladys Lukhwareni third in 2:48:25.