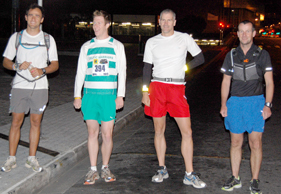 A
popular goal amongst runners is to complete a marathon on each of the seven
continents, but most take some time to achieve this due to family, work,
financial and recovery constraints. However, a new challenge was born in November 2003 when British adventurers Sir Ranulph Fiennes and Dr
Mike Stroud managed the feat in just seven days in the Land Rover 7x7x7
Challenge. Six years year
later, Irish ultra-runner and event organiser Richard Donovan decided to
attempt the challenge in under six days, and after running in Antarctica, Cape
Town, Dubai, London, Toronto, Santiago and Sydney, he had brought the record
down to five days, 10 hours and eight minutes.

Not content with that, in mid-January of this year
he decided to try doing it in less than five days (120 hours), since he was
going to Antarctica soon to recce the route for the upcoming Antarctic Ice
Marathon that he organises. Thus, within two weeks, The World Marathon
Challenge 2012 was set-up, which saw Richard return to Cape Town for a most
unusual midnight marathon.

“The Russians stage their Antarctic
flights out of Cape Town, so that makes it a logical point for the African leg
of the challenge,” explained Richard just before starting his Cape Town run. “I
prefer to run the Antarctic leg first because it is probably the hardest due to
the extreme temperatures and weather, but the rest are just as hard when you only
have eight or nine hours between each run. But I’m running to raise funds for
GOAL, an international aid agency that works to
alleviate the suffering of people affected by famine and drought in the Horn of
Africa, and that keeps me going.”

So, having just run a 4:21:11 marathon in
Antarctica in temperatures as low as minus-10 degrees Celsius, Richard immediately
flew 4200km back to Cape Town, landed around 11pm on 1 February, and was driven
straight to the start point of the Aca Joe Cape Town Marathon by James Evans,
President of Athletics South Africa. As event director of the race, James had
guided Richard along the course during his 2009 run, and was on hand to do so
again.

Waiting at the start were
local runners Paul
Britain, David Fox and Cole Stanton, who had volunteered to keep Richard
company, and after a brief chat, the four set off, accompanied by a mini convoy
of seconding cars. With quick refreshment stops every five kays, they finished
at the Cape Town Stadium in 4:23:51, and after a quick shower at Paul’s
house, Richard was whisked back to the airport to catch his flight to Brazil,
just eight hours after landing in the Mother City!

Next up Richard ran a 4:19:00 marathon on the Sao Paulo
Air Force Base, then flew to Orlando in the USA and ran a 4:44:27. From there
it was off to London for a 4:32:45 run in temperatures as low as minus-6 degrees,
but he was warmed up by a surprise visit from his three sisters and his niece. However,
by this stage he was taking serious strain, as can be seen from this tweet
while waiting for his flight to Hong Kong: “Not able to keep food or
liquids down, which is a result of a combination of fatigue and travel. This is
a ‘marathon’ challenge of a different nature!”

That made the remaining legs very tough, but he
finished Hong Kong in 5:03:05 and Sydney in 5:21:40, crossing the finish line
in 4 days, 22 hours and three minutes! He had run 295km, flown 43 500km in just
under 56 hours in the air, and spent 10 hours waiting in airports and 18 hours
disembarking, going through customs and travelling to and from marathon
locations. His average finishing time for the seven marathons was 4:40:51.

After finishing, Richard wanted to
say thank you to everybody that followed and supported him, and who made
contributions to GOAL. “I am also extremely grateful to the measurers and
support crews in each location for their hospitality and for making the effort
possible. Finally, apologies to the Australian Border Control agent for causing
alarm when answering what countries I visited in the previous six days!”

Go to www.worldmarathonchallenge.com to find out more about
Richard’s run.