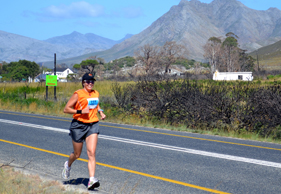 With a loud crack, the huge tree began to fall,
but to the horror of the men cutting it down, it was falling the wrong way,
straight down on the Grade R classroom of the Carter Primary School in
Alexandra, Gauteng. The heavy branches crashed through the roof and severed the
lower legs of five-year-old Lewis Wynne, an energetic little boy who loved
running around and dreamed of becoming a policeman. Later that same day, Friday
14 October 2011, 38-year-old Carien Helberg of Somerset West in the Cape
watched the news on television and was moved to tears when Lewis’ mother told
how he had woken up and asked when he would be able to run again.

Having started running in 1996 and with a Comrades and
a couple of Two Oceans ultras as well as the AfricanX three-day trail event to
her name, Carien had decided that she wanted to dedicate her running in 2012 to
a good cause after watching disabled children taking part in the Pritt IronKids
race at the 2011 Ironman. “When I saw this one little blonde girl shuffling in
with a walking frame, I knew I had to run for a purpose, and not just run because
I can. So when I saw the news bulletin that night, the Wynne For Lewis Campaign
was born.”

With the help of Dezroy Poole and Jacky Maclean of Stillwater
Sports & Entertainment, organisers of the AfricanX, Carien made contact
with E.TV News reporter Michelle Craig, who had covered the story. Michelle put
her in touch with Eugene Makhene of the Assault Riderz Bikers club, who had sponsored
Lewis a wheelchair and who continue to support the Wynne family with groceries. Eugene has developed a
close bond with Lewis and got him into the Hope School in Parklands, which
specialises in the needs of disabled children.

When Carien went to Johannesburg a short while later for a sales
conference, Eugene took her to meet Lewis and translated for her, as Lewis’
family speaks only Zulu. “It was a very emotional meeting. I
could see that Lewis’ parents, Kenneth and Ntswaki, were devastated, but Lewis was
smiling. The
wheelchair had given him some mobility, but the factory turned-house the family
of six live in is not wheelchair-friendly at all, and Lewis has to be carried
around.”

“In the meantime, Europecar and Centauri Medical have come on board to
sponsor Lewis new prosthetic legs, and these two companies will also cover the
maintenance costs for the next few years, until the State hopefully settles the
lawsuit for negligence that led to the accident. The law firm handling Lewis’
case is also sponsoring Lewis’ school and boarding fees as well as transport
costs to his new school for the first year, but he will need long-term funding
for medical needs, counselling, care and schooling, so I decided to establish a
trust fund and get sponsorships for my running to raise funds for Lewis.”

Kays for the
Cause

Carien, who has a degree in nursing and currently works as a
medical rep for an orthopaedic company selling hip and knee implants, is aiming to run at least
600km in official races from 14 October 2011 to 14 October 2012, including the
Two Oceans, Comrades and Washie ultras, as well as the 3 Cranes and AfricanX
multi-day trail events. She will be running most of these races with long-time
running partner Elize Kruger of Kimberley, with fianc? Gary and
Elize’s husband, Frikkie, as their seconding team.

The AfricanX in March is set to be a highlight of the
campaign, with Eugene and his fellow bikers planning a road trip around the
country, in conjunction with Biker’s Life
magazine, to raise funds for Lewis, including a stop-over in Kleinmond during
the race to support Carien. Dudley of Biker’s
Life says they’re going to make a huge bike procession into Kleinmond, so AfricanX
is going to be a very special race for us all,” says Carien.

“I call Lewis Little Brave Heart, because nothing gets
him under. I think he will show everybody that life is what you make of it, and
will reach out to others who have suffered, to tell them to go on with life. He’s an incredible little
boy, and I want to do what I can to help get him back on his feet.”

To support Carien’s campaign to help Lewis, go to www.wynneforlewis.org.