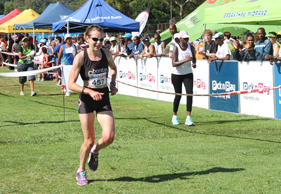 The Pick n
Pay Marathon is more than a race, it is a fun-filled day with something for
every member of the family and every type of runner. The race has built up a
status among South Africa’s competitive runners as a great one to test
endurance and pace, while it is marked out months in advance in the diaries of
many a recreational runner.

The route has
been described by many as a bit challenging at times, as the second half of the
half marathon loop has several inclines between the 14 and 17km markers, while
the last stretch has a strong climb to the finish. The 42km incorporates two
laps and is often used by many runners as a qualifying race for Two Oceans or
Comrades. The marathon’s course records are still held by Mark Plaatjies (2:14:47
in 1984) and Frith Van Der Merwe (2:33:29 in 1990).

This year
saw Thabo Nkuna winning the marathon in 2:21:42. “I did my homework on this one
and I am so happy that I did so well. It was a good race and this is a good
start, as Two Oceans is soon!” Thabo’s team mate from Bonitas, Riana Van
Niekerk, took the women’s race in 2:59:25. “It was pretty tough going. Bonitas
as a club sees this as an incentive race for all, but I went in it at full
force. I was nervous but I decided to try my best and give it a bash. In the
last 2km I went well and took the lead near the end, so I’m happy.”

In the half
marathon, ADT Athletic Club’s Jeffrey Gwebu was the first man home in 1:07:02
while Nedbank Running Club’s Kim Laxton was the first female finisher in
1:22:00.

Modern
Athlete was at the finish line and chatted to a few runners on their race day experience.

“The race
was good. It’s the second time I’m running it and I trained well for it. I’m
from Kenya, so I’m used to the altitude and my breathing was fine. I have just
come back from injury, so I’m happy with my performance on the day.”

“This is my
first race of 2012, so I’m happy with my run. The weather was good on the day
and I started quick, picking it up near the middle. Sometimes it was extreme in
the heat and in the last 10km I got stitches, but overcame it. In the last 4km,
though, my pace was fast.”

“I started
the race a bit late, and pushed hard, even though it’s not the flattest course,
and luckily I started catching up to the women because I’m good on the hills.
The weather also turned out to be great, even though it was warm.”

“My time
was around 1:55 and it was five minutes faster than I set out to do, so I’m
happy. The terrain is not too bad and the route is quite easy for a 21km, even
though there are three tough hills to get through.”

“In the
second half I was a little dehydrated due to the heat and because I pushed hard
in the beginning. Around the 35km I needed , but I pulled through and I felt
good at the end of the day. This is my fourth time running this race and it’s
always great.”

“I enjoyed
the course very much, but it’s the sort of course where you can’t get into a
proper rhythm throughout. The altitude was okay and the weather was warmer than
I thought, but I’m happy with my time just under three hours.”