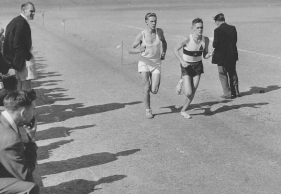 Over the
years, 45 men have earned the title of Comrades Marathon winner, but only 17
managed to win it more than once. In a still more exclusive club, just five men
achieved the remarkable feat of winning it five times – and Jackie Mekler is
one of them.

Jackie has
just celebrated his 80th birthday with family on his farm near
Nelspruit. As a fitting birthday gift, his family collected messages, pictures
and stories from friends, fellow runners and business associates, bound it all
together in a book, and what a memory it is! After all, Jackie is a man who
held world track records over 30, 40 and 50 miles, and won 14 standard
marathons and 13 ultra-marathons locally and internationally. And what makes
his achievements even more remarkable is that nothing was ever given to him on
a silver plate.

Jackie’s
mother died when he was nine and he was sent to live in an orphanage. “I didn’t
enjoy it, but I had no option. I was anaemic and always on medication. When I
started to run I dreamt of winning races and that became a great incentive for
training and pushing myself hard,” says Jackie. In 1948, at the age of 16, he
joined Germiston Callies. He would sneak out of the orphanage to go join their
runs. “I had to catch a bus to town and then a train to Germiston before
walking three miles from the station to our training spot. I was very
determined to make a success of my running.”

Jackie was
later expelled from the orphanage after he sneaked some bread out of the dining
room for a friend. He lived in a boarding house with his father before starting
his career as a printing trade apprentice, as determined to succeed in business
as he was in running. He worked overseas for a while before returning home and joining
Penrose Press, where he stayed for 28 years and evetually became MD.

Jackie had
a close relationship with three other legends of South African running, Arthur
Newton, Wally Hayward and Fred Morrison. “Wally was a member of Germiston
Callies and we eventually became close friends, even though he was coming to the
end of his career and mine was just starting.” In 1953, Jackie, Wally and Fred
ran the London to Brighton race and stayed with Arthur. “That was one of the
most amazing things imaginable. We had to take the cheapest flights possible, so
we drove to Mozambique and took a plane over Africa to Spain. It took us seven
days to eventually get to London. I remember us all being cramped up in this
little car and I am sure that is how I hurt my knee, because before the race I
was in agony! Eventually the pain wore off and I went on to win the race.”

The
following year Jackie finished second in the British Empire Games before
spending a year with Arthur in London in 1955. While working in the printing industry,
he raced extensively and finished third in the British Marathon Champs, and
second in marathons in Scotland and Finland. “I also ran a 100-mile race, Bath
to London, where Wally broke the world record and I placed second. My time
overseas was a great part of my youthful life. I had great friends in Wally and
Fred. Wally and I did a lot of training together though he was 45 and I was 21.
When I eventually won my fifth Comrades and became part of the exclusive club,
it was so much more special for me because I was with Wally and Arthur.” (The
other two members of the club are Hardy Ballington and Bruce Fordyce.)

Jackie’s
training in those days was unlike anything done today. “I ran to get fit and I
ran as many races as possible, sometimes 10 marathons a year. There was no such
thing as scaling down or peaking. I would run 50 miles on a Sunday morning and
in the evening I would do a fast 10 miles. I remember going to the Drakensberg
to train. I would run before breakfast, after breakfast and do a third run in
the afternoon. One week I ran 440km. My biggest downfall and biggest asset was
exactly the same thing, my love for running. I loved it so much that I did too
much at certain times.”

In 1955,
Jackie had a major slump in performance and for five years no one knew why. “I
won Comrades in 1958, but my performance was erratic. Eventually it was
established that I was anaemic. With the right diet I was running brilliantly
again, and in 1960 I won Comrades a second time.” He went on to win in 1963,
1964 and 1968 as well, but started struggling with Achilles problems and eventually
retired. Jackie returned to Comrades at the age of 53 to finish in 8:23. “The
last time I attempted Comrades was when I was 63. Unfortunately I had a stress
fracture in my foot and only got halfway.” He finished with 12 Comrades medals
– 10 gold, one silver and one bronze.

Jackie is
well remembered as one of the few runners who had more than one pair of running
shoes back in the days. In fact, he had six pairs! “After a few runs they got
dirty, so I thought it was easier to clean six pairs than one. I kept one pair
just for racing, trimmed them off and made them as light as possible.”

He says he
finds it hard to single out a specific special memory of his career, but says
one of the highlights was when he became the first person to break the magical six-hour
barrier in 1960. “Strangely enough, it was my easiest Comrades ever. I broke
the record by 16 minutes and won by five miles. I was just in such good form.”

It is also hard
for him to pinpoint the greatest Comrades runner of all times. “Runners such as
Arthur Newton, Wally Hayward and Bruce Fordyce all come from a different era.
You can compare times, but obviously athletes run faster today for a hundred
different reasons. In my time, the best Olympic Marathon time was 2:29. Look at
the times today! And today you have people like Tim Noakes. We did not have
that.”

Jackie
still goes to Comrades each year, where he helps to hand out Green Numbers, and
he still runs seven to 10km a day. “I plan to keep on jogging for as long as I
enjoy it. When I can’t enjoy it anymore, I will stop.”