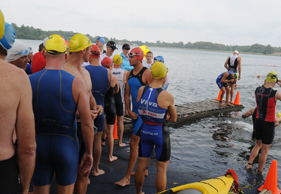 Over
130 ‘out of town’ athletes made their way to the Bay for the event, including
the big names Henri Schoeman, Claude Eksteen, Tayla Glover and Glen Gore. Race
morning brought ideal racing conditions for the start of the Elite and Age
Group race. Claude Eksteen took the honours in the men’s race, finishing in a
time of 1:58, followed by Henri Schoeman (1:59) and Gian-Nicola De Dominicis (2:03).
The women’s race was won by Lauren Dougall (2:16) followed by Tayla Glover
(2:19) and Geraldine von Fintel (2:31).

The
local Traffic Officials from uMhlathuze Municipality were out in full force and
the safe racing conditions allowed athletes as young as eight to race the same
route as the senior athletes. Special mention must go to the deaf athletes from
the Fulton School for the Deaf, who also participated in the event under the
guidance of their principal, Bev Campbell.

Thank
you to our title sponsor, Saverite, and Liquor Land, Backsberg Estate, Future
Life, ABI, Modern Athlete, Aspen Pharmacare, Browns Cash and Carry,
Mkuze and Empangeni as well as Umhlathuze Pharmacy, who all assisted in making
this event such a resounding success.