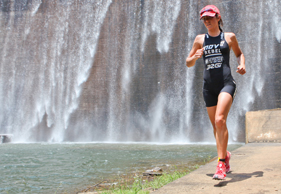 Married life is definitely treating Conrad Stoltz
well! He is usually a little late for most of his races, but pitched up on time
at Buffelspoort before winning the event in a time of 2:20:08. He described the
event as a fun season-opener. “It was really scenic with a great atmosphere. I
had a good swim and made my attack on the mountain bike. I enjoyed this leg as
it featured a bit of everything. The run was tough with some big hills, this
combined with the heat and humidity on the day made it quite a challenge. I
take my hat off to all XTERRA warriors that raced longer than three hours. It’s
a long day out there.” Dan Hugo came in second, while Stuart Marais finished
third.

“I am really happy to start the season off on a good
foot and am looking forward to XTERRA Grabouw,” says Conrad. “I am thankful to
my wife, Liezel, as she helps and supports me on every level. I’m usually late
for my races, but this morning I was on time! I could relax and take it easy
before the start, all thanks to her. Married life really is better than
anything I thought possible.”

Carla Van Huyssteen won the women’s race in 2:52:55
and was really pleased by the growth in the individual women’s category of the
event. “Every year I wish that the competition would become stronger, and when
it does, I’m forced to push myself even harder. XTERRA Buffelspoort is always
tougher than I’ve prepared myself for mentally. This year’s event was no
different. My wetsuit tore during the swim, resulting in some time lost and me
having to push extra hard on the bike. As a result I almost blew on the run!”

“I am happy with my result, though, and really enjoyed
the race. XTERRA SA truly is a great event with a vibe that is just as good, if
not better, than any overseas XTERRA,” says Carla, who walked off with her
third consecutive win at XTERRA Buffelspoort. Susan Sloan came in second, while
Sylvia van Tromp finished third.