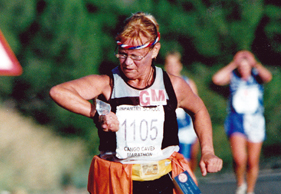 Nowadays the Old Mutual Two Oceans Marathon is one of
the biggest and most popular ultra-marathons in South Africa, but back in the
early 1970s, it was still just a fledgling event that had begun life as a
training run for Cape Town runners ahead of the Comrades Marathon. But there
were no runners of colour, thanks to the then Apartheid laws governing the
country, and no women took part either, because women were generally considered
too frail to run marathons, let alone ultra’s.

But attitudes soon began to change, and in 1974
Theresa Stadler of Spartan Harriers became the first female Two Oceans entrant.
She finished in 7:33, missing the six-hour cut-off by a wide margin, but her
participation inspired other women to follow her example, including her
clubmate Ulla Paul, who had seconded her on the day. “I was allowed to enter in
1975, but we all had to run a qualifying marathon under three hours 45 minutes.
I ran 3:47 in the Durbanville Marathon, but then the following Saturday UCT
arranged another marathon, and I decided nothing ventured, nothing gained, and
finished in 3:40,” says Ulla.

That saw the petite housewife and mother of three, as
she was eloquently referred to in several newspaper articles, line up in 1975
and become the first official female finisher and first women’s winner of the
Two Oceans as she came home in 5:14:51. “I finished 161st out of 212 finishers
and was the only woman in the field. That race just flew by – I can remember
running up Chapman’s Peak Drive with a guy from Rockies Road Runners, singing She’ll be coming round the mountain when she
comes, and I was flying when I hit the finish at Brookside!”

That same year she was the only woman in the field at
the Peninsula Marathon, Middelpos Marathon and the inaugural Beaufort West
52km, and then she became the first woman ever to enter the Paarl Rock 16km
race, which according to the newspaper reports, had the ultra-conservative
organising committee pulling their hair out! “No woman had ever dared enter
their event before, but just for the record, I came stone last,” laughs Ulla,
who went on to run a second Two Oceans in 1976, finishing third out of three
women in the field, with a time of 5:58:53.

Ulla’s running career then took an 18-year break
following her divorce, which meant she had to go work fulltime to make money
for her family, working at the Red Cross Children’s Hospital. She was in
another relationship after that, but when her partner died of lung cancer in
1994, she decided to rejoin Spartan Harriers. “I felt the time was right to go
back to the road, because I had always been active. I felt like I was in a
different body, and of course the people had all changed, but I quickly got
back into it.”

By 1999 she felt ready to take on the Two Oceans
again, 23 years after her last one. “I was nervous about qualifying, but at
least I knew the route, and I finished in 5:49:45. The funniest moment was when
I passed a much younger man going up Constantia Nek and he said, ‘Bloody
walker! Bloody master! Bloody woman! Bloody hell!’ ”

She ran the ultra the next five years as well to
finish with eight medals, and gave the Comrades a try twice, but narrowly
missed the halfway cut-off in 2000 and in 2003 had to bail because she was not
feeling well. She also did four 100km races, with a best time of 14:16, four
Toyota 50km ultra’s, and several 80km Big Walks, with a best of 11:34

These days, at a sprightly 69, Ulla is still to be
seen out on the roads just about every weekend, doing races up to 21km, and
even lining up for 5km fun runs if the official race distance is too long for
her or the cut-off is too tight. “I mostly do power walking, with a bit of
running, although some days I feel like I’ve done a marathon when I do a half!
I also love the cross-country races, and I just like to be part of races every
weekend.”