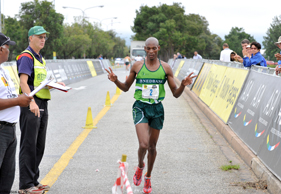 The opening ceremony of the
Games will take place on 27 July and the Games will run for two weeks, ending
on 12 August. It promises to be a spectacular event, with 26 sports broken down
into a total of 39 disciplines that will be contested by the world’s best. From
all corners of the globe, the race for spots on the various countries’ Olympic
teams is hotting up as athletes try to make the qualifying standards.

In South Africa, according to
SASCOC, the final date for Games qualification is 31 May, but various codes
have other qualification cut-offs. “We have spent many hours investing in our
sports stars and hopefully we will reap some of those rewards in London. Many
of the codes are busy with their final qualifying preparations right now,” says
SASCOC Chief Executive Officer Mr Tubby Reddy.

Amongst our
hopeful Olympians are some of the best long distance runners in the country,
and Modern Athlete caught up with
three of them: Coolboy Ngamole and Ren? Kalmer, who have both already qualified
for the Olympic marathon, as well as Irvette van Blerk, who is hoping to
qualify next month.

One of our
country’s top half marathon athletes, Irvette decided last year to take on the
marathon distance in order to make the Olympic team. Though she has been
training for this distance, she has not yet completed a marathon – her first
marathon was going to be the Soweto Marathon in November, but after an
unfortunate fall in the early stages, she had to withdraw later in the race.
She now has her eyes set on qualifying for the Games at the upcoming London
Marathon in April, where she hopes to run the required sub-2:37 qualifying
time.

“I am
nervous with it being my first marathon. Soweto was not the best of
experiences, but luckily I have recovered from all injuries and I am ready for
this new challenge. I believe in myself and would like to enjoy every minute of
the experience in London.” She will be accompanied to the London Marathon by
fianc? and Olympic 400m hurdles hopeful LJ van Zyl. “LJ is also a big
motivation to qualify. It will be very special for both of us to share an
experience such as the Olympic Games.”

Irvette will
be jetting off to New York to run the New York Half Marathon on 18 March. “That
is where I set my PB of 70:56 last year!” And just like most athletes, she is
dreaming of an Olympic medal, but at the same time she is realistic and says if
she does qualify, she will aim for a PB at the Games.

She is one
of our country’s best known and most loved female athletes. After a career of some
15 years mainly focussing on the 1 500m on the track as well as shorter road
distances, she decided to shift focus to the marathon last year. Her biggest
breakthrough yet was recently when she ran a 2:29 marathon in Yokohama, Japan,
and qualified for the Games.

“I am very
happy that I made the switch to the marathon distance last year already,
because I underestimated the distance! With my performance in Yokohama I proved
that I can compete internationally. I am convinced that I can still run much
faster.”

Marathon
athletes have until 30 April to qualify for the Games, whereafter a team of three
athletes will be chosen. “Till now I am the only SA women who has qualified,
but I am keeping my fingers crossed that we will be a full women’s team
representing South Africa. I don’t think a full SA women’s team has ever been
chosen, so it will be fantastic if another two women can qualify.”

Ren? will
soon be in action in London and Japan as a pacemaker. The first race is the
Nagoya Women’s Marathon in Japan. “I need to run at 3:25min/km pace and have to
pace between the 15km and 25km mark.” In April she is off to London to help
those trying to qualify in under 2:28. “This is going to be such great
experience in the build-up to the Games.”

Having been
part of the Olympic team in 2008 in Beijing, Ren? says this time around she
knows what to expect. She does not plan to run another full marathon before the
Games, as it takes too much out of one. “I am concentrating 100% on the Games.
I will be running a few local races, such as the Two Oceans Half Marathon and
the Spar Women’s series.” As for the Games, she says she is hoping to be
competitive. “I am hoping for a PB, everything thereafter is a bonus.”

The reigning SA Marathon Champ took much of the pressure off
himself this year by already qualifying for the Games last year, when he flew
home in a personal best time of 2:10:43 in Valencia, Spain, in November. Another
four of our male marathon runners have already run sub-2:15 qualifying times
for the Olympics: Lusapho April (2:11:09), Stephen Mokoka (2:10:29), Hendrick
Ramaala (2:12:22) and Othaniel Phahlane (2:14:55). It is up to SASCOC to decide
who makes the team.

Coolboy seems a certain pick and
says he is very excited about the prospect. “I am very happy with my training
up to now. I have no injuries and am feeling good.” He plans to run some track
and field events leading up to the Games. “I also want to focus on some 10km
and 21km races to build up some speed,” he says.

Unsurprisingly, he admits that
he dreams of winning an Olympic medal, but right now his biggest goal is just
making the team and representing South Africa in London on the world’s biggest
sporting stage.