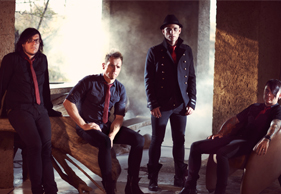 With catchy
songs like Push me to the Floor and Life Design, The Parlotones have made a
name for themselves on the world stage. The band, made up of lead singer Kahn
Morbee, drummer Neil Pauw, guitarist Paul Hodgson and bassist Glenn Hodgson,
have won several South African Music Awards (SAMA’s), MTV Africa and MK music
awards for Best Video, Best Group and Best Rock Band. However, their popularity
and iconic status have not gone to their heads – they are giving back and as
part of their social responsibility have decided to climb Kilimanjaro in March
to raise awareness of the abuse of women and children.

“This is
special for us to be a part of,” says Paul. “Kilimanjaro will be a unique
experience and we will be bringing awareness to the injustice of abuse against
women. It’s a social issue that’s still in our culture today.”

The band
will be joining a host of other celebrities and media personalities to climb
from 5-9 March. The climb, organised by the UN, will highlight the
“Africa-UNiTE ‘Speak out Climb up to end Violence against Women and Girls’
campaign. This initiative was started to rally society in eradicating violence
and abuse against women. “The issue won’t just go away by climbing a mountain,”
explains Paul, “but if we can’t solve everything, some change will be
significant in the long run. We can’t just do nothing about the issue. We’ll
look back 10 years on and see how things have changed – even if it’s small.”

The band
has already been involved in numerous charities and awareness campaigns, such
as Earth Hour, Carbon Free, a Japan Earthquake Relief Fundraiser, United
Against Malaria and The Starfish Foundation (a charity for orphaned children).
Paul explains that with a public image comes a public responsibility: “You have
to give back. We don’t go along to our shows and preach to our fans about
social causes. People see what we’re doing and follow on. When you give back in
any way, you grow as a human being.”

CLIMBING TO THE TOP

The
Parlotones have recently been on a US
tour before coming back to Africa in March for
the climb. While their training guide recommends eight weeks of training, Paul
says they have not had much time for training. “We probably have a good two to
three weeks,” he laughs. “We don’t know what to expect at all. We’ve done
adventure stuff like sky-diving and bungee jumping, but climbing is different.”

The band
has fit in several hikes and are taking time out on as many outdoor trails as
they can. “We’ve learnt to hike regularly, going up and down to get used to the
impact on the legs. We have learnt to keep our endurance up, because soon we’ll
be climbing and walking five to six hours at a time. Neil, the drummer, is
probably in the best shape out of us all, because he runs and walks regularly.”

Mount Kilimanjaro is 5 895m above sea level, so Paul is weary about
altitude factors. “We have to be fit, but also we don’t know what to expect
from being at such a high altitude. It’s a weird thing, because some people get
affected and some don’t. Your mind can just switch off and some can’t go
further, so we’ll have to prepare for anything.” The UN has also sent the band
various checklists and recommendations for the climb. Apart from a training
schedule, there is a list of things to bring along like proper hiking boots,
weather-proof jackets for inconsistent weather, thick, breathable socks, and
walking sticks.

While the
band sees the climb as a big adventure and important part of their social
responsibility, their new album, Journey Through
the Shadows, to be released by beginning April, also pays tribute to social
causes, because certain issues need to come out from the shadows in order to
move forward. “The new album has The Parlotones vibe, but we go in different
directions. It’s exciting and it’s definitely our best work yet,” says Paul,
who adds that the band is planning to tour the US again, but will also travel
South Africa to promote their new material while making sure their public
persona continues to make people aware of social issues.